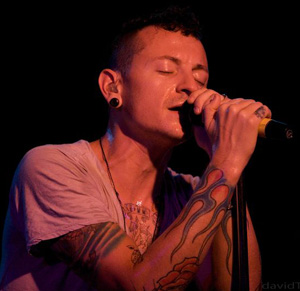 With three great musicians helming this new project, Dead By Sunrise offers music fans a very polished, fast-paced and more honest version of Chester Bennington’s vocal ability. Here, we actually get to listen to singing and some yelling, but in a more hard rock timbre than the white boy rap that was found in Linkin Park songs.

The live show is energetic, and Bennington is all about his fans, yelling at one point: “I want everyone’s e-mail address that’s here tonight so you can get in free to the next show. This is what it’s all about.”

Guitarist and songwriter Amir Derakh then leaned into the crowd to be greeted by grabbing hands trying to get a piece of their favorite rock star.

Despite the band’s ability to play a great live set, it’s the songs that leave some wanting more. The Linkin Park sound is very hard to get out of your head, and the songs come off as more of the same kind of thing heard on the radio. The big difference with this band is that you have a very solid live show that can’t be replicated by other bands with the same style.

With this being the jumping off point for Dead by Sunrise, it’s going to be their next few albums that show the true potential of this act. As long as Linkin Park doesn’t get in the way and push this band to the side, we could have a new band that will keep overproduced rock ’n’ roll at bay.