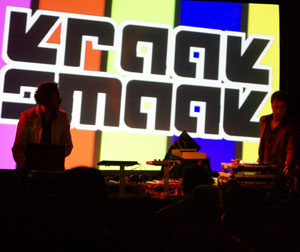 The night before Halloween, a house party descended on the Roxy to kick off the party weekend … except they forgot to bring the crowd. This venue has held up to 600-plus people but was barely alive with only 120 in attendance.

The crowd’s lack of size had a tremendous effect on the DJ set from Kraak & Smaak. With no energy to feed off of, the duo simply went with their flow and played song to song with little emotion.

The featured set of the night resembled a listening party more than a live event. The two DJs did little to reach outside the sound of their studio counterpart.

Main supporting act Fort Knox Five put more emotion and energy into their set than the openers. Faced with the same sized crowd, the lesser-known DJ team ignored the size of the crowd and gave them a show as if it was a full house.

All excuses aside, this Kraak & Smaak performance lacked passion and showmanship – two things a live performance needs to set itself apart from the rest.