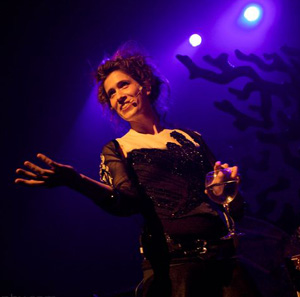 Beauty in a voice has never been so welcome to so many. The sold-out house at the Fonda waited with bated breath to hear the ethereal voice of Imogen Heap.

A stage littered with cables and instruments made for a tricky stage flow. Heap, who is known for having a hand on every instrument, seemed a bit disoriented as she admitted to adding new instruments a week before the show kicked off. These adjustments began to take away from the show as her lag time between songs reached upwards of seven minuets, and most of the standing room only crowd started to give up halfway through the set.

Despite the fact that it took roughly two hours to get through her one-hour set, the music Heap made was passionate and beautiful. Her devotion to each song came through in each note as she poured herself into the music. Perhaps a better stage or just more time would have been the factor in the overall feel of the show.

Her fans were supportive and stood for her songs and got something a bit special as well. Not very often will artists bare all and let you not only see their imperfections, but become a part of them as well.

Heap will be back in April with the conclusion of her tour, hopefully by then all the kinks will be worked out so we can get a chance to see the final product. A voice like this doesn’t come along very often, and no matter how disjointed the show, it’s still nice to stand and appreciate a little bit of something from another world.