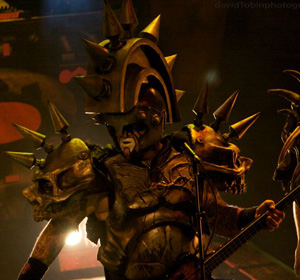 Starting things off, the vilest group of viciously talented performers showed a very special “Behind the Murder” (a play on VH1’s “Behind the Music” program). The “episode” focused on GWAR and their 25-year battle to go back home and leave this horrible planet once and for all.

In true GWAR fashion, they started the set off with a barrage of their more aggressive tunes. In full costume, the five musicians flew from song to song and kept the energy going throughout the show.

Just into the second song the blood began to flow … or should I say spray! It was everywhere. Fountains of color exploded on stage and poured into the screaming pit of fans clamoring for their taste of the battle.

No other metal band would have this many fans wearing white T-shirts. The goal is to coat yourself with as much blood and guts during the show and keep the newly colored shirt as a memory of a night well-spent.

Musically, this band is as tight ever. New songs and old sounded polished, and with all the commotion going on and their heavy costumes, it’s amazing that anyone could pull it off, let alone sound good.

With a packed house, GWAR showed Hollywood that they are just as strong as they were in the ’80s, when a lowly pimp gave some monster aliens a chance.