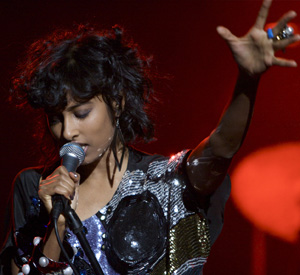 Opening for a Raphael Saadiq crowd was not an easy task, but Anjulie was fearless to show the crowd that she has what it takes. However, the audience wasn’t feeling her mix of Middle Eastern and pop music.

Anjulie’s songs were very basic and didn’t do much to grab the spectators. The simple lyrics stirred little emotion while the dancing on stage seemed more suitable for a kid’s birthday party or ’80s video than a crowd bent on getting down to some soul and funk.

At one point, Anjulie joined in a percussion breakdown on her own set up of toms. Generally, during a percussion jam between musicians something other than a repetitive pattern emerges, but not in this case. The addition of her drum solo took away more than it added.

The highlight of Anjulie’s set was her last song, a Middle Eastern number that offered some originality and insight into her act. The problem was this was the only song with any kind of dynamic composition, and it came at the end of the set.

It may take a year or two, but if Anjulie can stick with her act, she might find a way to refine things and bring more of her originality into her performance.