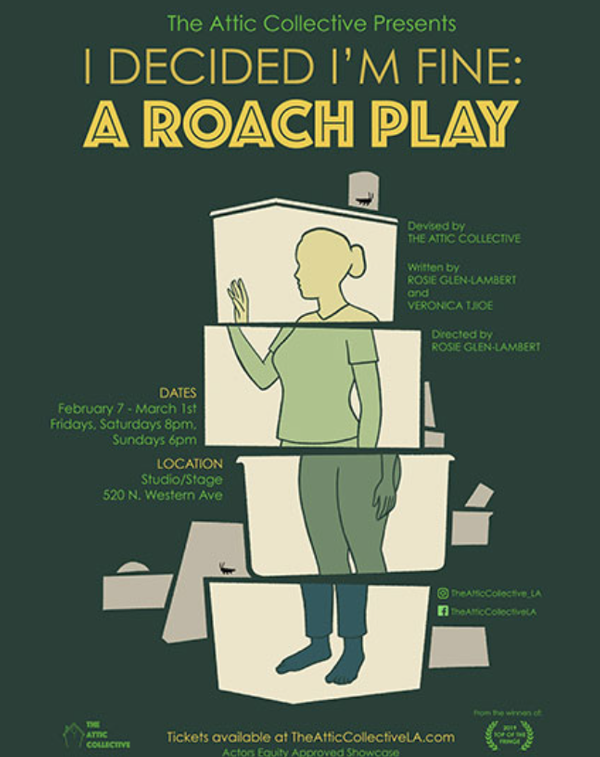 The Attic Collective is bringing its unique blend of whimsy, clowning and magical realism to Los Angeles audiences this February with its production of I Decided I’m Fine: A Roach Play directed by Rosie Glen-Lambert. Written by The Attic Collective’s literary manager Veronica Tjioe and the company’s artistic director, Glen-Lambert, the play addresses hoarding, an American phenomenon, which is often stigmatized but rarely discussed.

SYNOPSIS: When does clutter become a problem, and whose problem does it become? I Decided I’m Fine: A Roach Play addresses hoarding, an American phenomenon which is often stigmatized but rarely discussed. After the sudden death of the their infant child, Ellen and Stephen find themselves faced with the difficult task of moving on from the objects that remind them of the incident. For Ellen, this proves to be too overwhelming of a task, leading to years of compulsive accumulation. Juxtaposed with the play’s realism is a second layer of the play which utilizes clowning, comedy, and a cockroach musical to steer the audience through the many different ways hoarding is perceived and portrayed in society.

This version of I Decided I’m Fine: A Roach Play is a revamped adaptation of a piece originally devised by The Attic Collective that was presented at Son of Semele in August 2018. Since this initial production, the company worked collaboratively to rework the script through a series of workshops, which included improvisation and detailed research. Tjioe and Glen-Lambert incorporated these discoveries into the script, and this new production features significant changes from the first staging.

In 2019, the company’s successful run of The Last Croissant at the Hollywood Fringe Festival received numerous accolades, including the coveted “Top of the Fringe” award and the award for “Best Ensemble.” The show also received the “Best of the Broadwater” award, leading to an extended final performance to a sold-out house. The company also received nominations for the Steve Kent Award for inspiring political or social change and the Larry Cornwall Award for outstanding music in a play.

Official Website
This event page has been viewed 32 times.