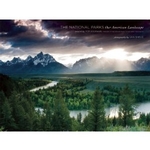 Take a photographic journey from the Florida Everglades to the highest mountain in North America with Ian Shive, author and photographer of the new book, "The National Parks: Our American Landscape." Shive will describe the challenge involved as he found new ways to document national parks that have already been photographed countless times - and how he brought that fresh perspective to the work. The book is a best-seller, and he'll explain how an aggressive marketing campaign led to that success. Shive will describe how applying multimedia, social networking, and internet-based publicity were used to further develop his career in editorial and commercial photography. Ian Shive is a Los Angeles based conservation photographer whose award-winning work has received critical acclaim nationwide.
Official Website
This event page has been viewed 1042 times.