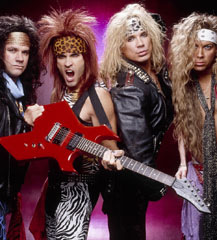 The lights at the Roxy on a recent Monday night dropped from bright white to pitch black as the curtain rose, revealing the true spirit of the new Sunset Boulevard: Metal Skool. The first chest thumping notes of the Scorpions’ classic “Rock You Like a Hurricane” exploded out into the crowd, who already had their fists in the air pumping the beat, screaming the chorus right along with the band.

The band, dressed to the nines, looked like they’d stumbled through a time portal from 1986. Their hair was huge and styled, their instruments glittered and shined, and their “packages” – as they will be the first to tell you – were visible from the back wall of the club. “It’s not about how good we’re playing, it’s about how good we look, and we’ve got that down. We wear tight spandex pants to show off our asses,” explains lead vocalist Michael Star.

According to Star, the band’s look is not an accident but instead a carefully planned cornerstone of their show. He prefers the type of spandex that best accentuates their bodies. Star motions with his hands as he notes, “The best spandex you can get is a four-way spandex. It stretches that way and that way.”

You can begin to see how it might be hard to take Metal Skool seriously, with their dead-on portrayal of a quintessential ‘80s hair metal band. Serious or not, though, they have taken over the Sunset Strip and become the biggest resident act since The Rocky Horror Show. When asked about the band’s “It” status, lead guitarist Satchel is quick to correct, exclaiming, “We are not the ‘It’ thing. We are the only thing on Sunset – except for [The] Body Shop, where you can see naked chicks – that fucking matters at this point.”

The crowds that come out to Metal Skool shows seem to agree. The band – completed by bassist Lexi Foxx and drummer Styx (are you starting to get the sneaking suspicion that these may be stage names?) – seems to have the superhuman ability to sell out shows.

“Our mission is to bring heavy metal back, for real, because people are dying for it,” says Satchel.

Since Metal Skool’s 1998 Viper Room debut when the band was called Metal Shop, the foursome has gained popularity exponentially. As for the name change? Satchel explains, “Some sleazy manager owned the name, but fuck that guy. He’s a fucking fuck.” He pauses for effect before adding, “He knows who he is.”

To Metal Skool, the show is all that matters. This probably grows out of the fact that they don’t play any original songs and haven’t put out any records. That aside, the experience that is a “Metal Skool Monday” at the Roxy is one not to be missed. From naked girls to Guns N’ Roses covers, their shows are always an insane event to behold.

Shows often end up more like parties and less like concerts, where die-hard fans show up trashed and in costume – an experience which includes the crowd in conjunction with Metal Skool’s performance. There are even weekly traditions, such as midget surfing, where a midget crowd-surfs from the stage to the back wall.

Also standard at every edition of Metal Skool is some sort of celebrity cameo, since the VIP section of the club is always burgeoning with stars. Everyone from Audioslave’s Tom Morello to Underwood’s Jeff Ramuno has sat in with the band, rocking old school metal tunes with everyone singing along.

Whether they are a relic of times past or a harbinger of things to come, one thing is clear: the people have spoken and they scream, “Long live Metal Skool!”

Metal Skool plays every Monday night at the Roxy on Sunset. For more information, visit www.metalskool.com or www.theroxyonsunset.com.