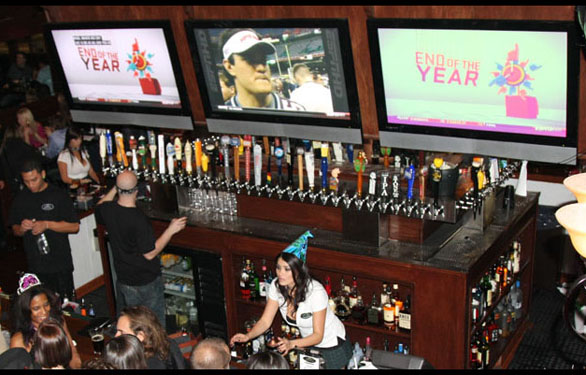 Remember the last time your friends desperately begged you to go out with them when you had midweek or weekend free time? And after you scraped up the inner strength to go out, you realized one small detail: In all of the urgency to get out and roam the town, you and your friends forgot to check local bars for drink specials and interesting happenings.

After much avail, you find a spot that isn’t quite what you and your comrades were hoping for, but you muster enough courage to stay inside the venue while barflies buzz around perplexed at you and your friends’ fresh vibes brightening up what would otherwise be a dismal watering hole.

To avoid situations like this, it’s always great to have a bar that you can rely on any day of the week. Lest you worry anymore about who has what drink special and when, Dillon’s Irish Pub & Grille in Hollywood throws the guessing game and rules out the window. It's located on the southeast corner of one of Hollywood’s busiest intersections, Hollywood and Vine, and its competitive drink special is tops ($3 beers every day). You can also cheer or jeer for teams during NHL, NFL, MLB and NBA seasons on the multiple TV screens.

Those familiar with Hollywood might have noticed its sleek-looking exterior or admired the darkly lit environment with its plethora of big screen televisions and wide open windows facing both major streets. Or maybe you noticed the staff at Dillon’s is dressed in traditional Celtic wear with matching green tartans and crew shirts – all accoutrements of a true Irish Pub. Whatever alluring factor draws you in to Dillon’s, it won’t be overshadowed by the beer and food menu.

Dillon’s not only boasts a large domestic list of beers, but it also carries imports that have become staples of quality beer here in America. For $3, you can’t go wrong, even when you are in the company of a highly selective person who only drinks Stella Artois. Rest assured, Dillon’s has it. The pub also has an amazingly diverse menu of pub and American foods that will hit the spot after you’ve begun delving into its extensive beer menu. With appetizers like Asian lettuce wraps, tuna tartar, ultimate nachos and mahi-mahi tacos, you have to keep your head in the game because it’s easy to fill up quickly with these starters. You can also sample the appetizer menu with the Dillon’s platter, which consists of two sliders of your choice with Buffalo wings, fried calamari and avocado fries.

For those who want a full meal along with their tasty beer, Dillon’s has traditional restaurant dining in the pub setting with salads, pastas, soups, sandwiches and burgers. Its entree menu boasts selections like Irish favorite corned beef and cabbage, braised teriyaki short ribs and fried chicken, plus seared salmon and Dillon’s protein plate for those who are a little more health conscious.

At meal’s end, be sure to reward yourself with tasty desserts like New York cheesecake, chocolate cake, fresh baked apple cobbler and traditional Irish bread pudding.

Next time your friends ask you to go out, tell them it’s under one condition: You go to Dillon’s.