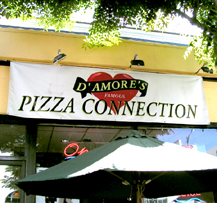 While most pizza parlors in Los Angeles claim to be the "best slice," they don’t tell you what kind of ingredients go into making that slice. For instance, the most important component to perfect pizza dough is the quality of water used. Let’s face it, potable drinking water has an aftertaste. Do you think the taste disappears when mixed with flour and a little salt? Of course not! It’s still the same metallic water. So what do most places do to make up for that? They add lard!

Before you think all hope is lost in the quest to find your favorite pizza pie, stop by D’Amore’s Pizza Connection. This West Coast eatery with an East Coast flair and Old World Italian recipes (that come straight from Mr. D’Amore’s beloved grandmother) takes pride in perfecting the food that so many of us love to devour.

To start, the dough is made with imported water from the East Coast by way of Boston. It is well known that some of the nation’s best pies come out of Boston, and once you taste the dough you’ll know why. In addition, the cheese is not the processed, pasteurized product that is popular at most eateries. Rather, it’s imported from a state famous for its cows – Wisconsin.

Tomatoes, specifically Northern Californian ones, are only in season during July. This is crucial in making sure you get a nice sweet flavor that complements whatever toppings you plan to adorn your pie with. Keeping this in mind, D’Amore’s only purchases its tomatoes when they are in optimal condition.

So now that you have the groundwork for a delicious pizza, it’s time for the toppings. If you like your pies loaded with meat, try the Meat Lovers Special ($2.50) or order the Combination with pepperoni, sausage, mushrooms, olives, onions and bell peppers. Pizza Bianco, a signature dish covered with sauteed fresh spinach and onion, roasted red peppers and loads of ricotta, romano and mozzarella cheese, is especially delicious when ordered as a thick slice ($2.75).

While D’Amore’s is probably best known for its pies, its salads and pasta dishes shouldn’t be missed! If you’re out with friends or family, try the family sized portions of Antipasto or the Chopped Spinach salad ($12.95) with pepperonchinis. Family sized Baked Ziti ($15.95) can be accented with eggplant or sausage.

UCLA students would be wise to pass up the other pizza spots on the way down the hill and stop by D’Amore’s Westwood location. Order lunch specials like two pizza slices, salad and a drink ($6.95) or a half sub sandwich (turkey, meatball, chicken parmigiana and more) with a salad and drink ($5.95).

D’Amore’s has eight Southland locations including Encino, Thousand Oaks, Canoga Park, Sherman Oaks and Malibu, with more locations opening soon. Make sure you don’t cheat yourself out of the proper pizza experience and try what Citysearch.com picked as the No. 1 pizza in the nation.

Date Night
Some first choices for dining in L.A. after last call at the bar
1,661 views