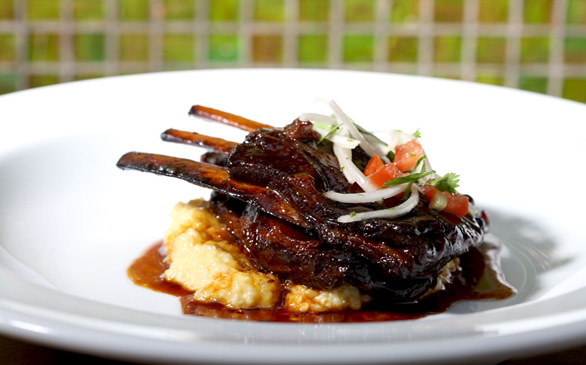 Only in Los Angeles could one of the city’s most talked about restaurants be located in a strip mall on a seemingly deserted warehouse strip outside of downtown.

Angelenos are no strangers to top-notch cuisine served in unassuming environments. The culinary landscape of Los Angeles is vast and varied – yet whether it’s tacos or pho that you’re looking for, no city boasts more hole-in-the-wall gems than L.A. Mo-Chica, a Peruvian-inspired restaurant located in Mercado de Paloma near USC, is no exception.

Mercado de Paloma, a brightly lit complex with primary colored walls, falls somewhere in between food court and mini mall. Built as a community development center, the Mercado consists of a series of stalls selling everything from Oaxacan woodcarvings to computer accessories. Food, however, is the main draw. Longtime favorite Chichen Itza is present as is Oaxacalifornia, the ever-popular Oaxacan juice bar. Mo-Chica is a relative latecomer to the complex, having set up shop in 2009, eight years after the Mercado opened its doors.

Since its debut, Mo-Chica has continued to dazzle locals as well as the national food scene. In 2011, Food & Wine Magazine voted the restaurant’s chef/owner, Ricardo Zarate, “Best New Chef in America,” one of the many accolades bestowed upon the young chef. Zarate hails from Lima, Peru, but his culinary chops were cut in high-end Japanese kitchens first in London and then in Los Angeles where he was the executive chef at Wabi-Sabi in Venice. At Mo-Chica, Zarate imbues the food of his homeland with the precision of a sushi-chef and the flavors of Japan.

The menu is small, tiny by most standards, and daily specials are scrawled in chalk on a blackboard. Every meal begins with Canchita, a bowl of what might be described to Americans as Peru’s answer to Corn Nuts. Like the basket of tortilla chips that graces tables at Mexican restaurants before a meal, this little snack is salty, crunchy and addicting.

Mo-Chica does not have a liquor license, but don’t skip ordering drinks. The beverage menu is as long as the appetizer menu and features native Peruvian thirst-quenchers like Maracuya, a passion fruit juice, Cebado, a barley ice tea with ginger and, my personal favorite, Chicha Morada, a purple corn tea that is reminiscent of horchata.

The Causa del Dia was described on the menu as a Peruvian Potato Salad, yet what arrived on our table was a far cry from the chunky potato and mayonnaise salads of my youth. Instead, what appeared was a perfect cylinder of rich crab salad topped with a layer of yellow mashed potato and vibrantly spicy sauce.

Next, I tried the Ceviche del Dia – a carefully composed selection of fresh seafood, lightly dressed with a tangy marinade, and served with thin strips of red onion, wedges of sweet potato and a handful of those addicting Peruvian corn kernels. The ceviche arrived in a bowl made of ice, which kept the fish refreshingly chilled. The soft fish paired with the crunchy corn was delightful – a new take on the familiar.

The highlight of my meal, however, was one of the blackboard daily specials dubbed Seafood Chicharrones. Deep-fried, yet not greasy, a mound of crispy calamari is served in a mini fry-basket – a playful presentation.

It’s hard to choose from the short list of entrees. Lomo Saltado – a Peruvian classic – consists of beef, roasted tomatoes and an architectural high-rise of thick cut fried potatoes. Oxtail Risotto, a decadent dish of braised oxtail and barley huancaina risotto melts in your mouth, but more familiar dishes like Arroz con Pollo stand out as well. The chicken is moist and succulent and the rice perfectly seasoned, but it is the spicy Salsa Madre that makes the dish spectacular. I regret not trying the Seco de Cordero, a lamb shank served with Peruvian canary beans and a cilantro puree, or the Quinotto, a quinoa risotto cooked with wild mushrooms and crème fraiche, but my stomach was out of room.

Chef Zarate has already expanded his Peruvian-influenced culinary empire with a new restaurant called Picca in Beverly Hills. No doubt, it’s next on my list.