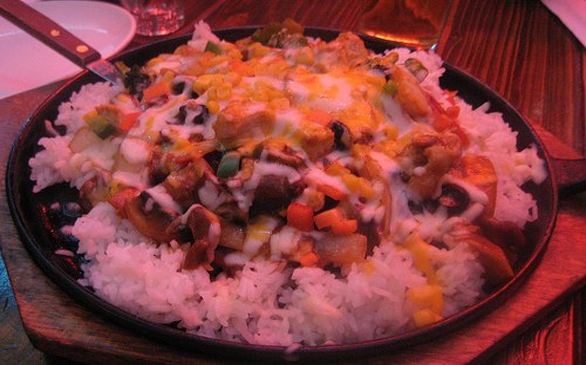 How is it that I’ve lived in SoCal for years and never heard of the pirate themed madness that is Crazy Hook? Not only is Crazy Hook all things pirates, but it sits on a block in the raging sea known as Koreatown, you know, where all pirates gather. I think the idea is modeled after all the novelty eateries you find in Korea, where you turn a corner and find yourself having kebabs and falafel or singing German songs during Oktoberfest. But really, Crazy Hook is actually found in Seoul, so it’s appropriate that they opened here.

I was pretty excited about finding Crazy Hook, and could only imagine what kind of food awaited me. I figured maybe a mix of Korean deep-fried treats with a twist of American deep-fried things like hot wings.

But first, I had to get past the one-eyed pirate staring me down as I approached the plank, I mean, main entrance. The ceiling is covered in sails and netting, just like on a ship. There’s flat screens everywhere, playing the latest and greatest Asian pop videos or sports if there’s a major game on.

The first, and perhaps main draw, that I noticed once seated were enormous test tubes with a spigot that sat on the tables. I looked closely to see that these behemoths were full of beer!

Of course we had to order the largest one, 5000CC, stat. It came out in a wooden keg – oh, I was already wishing I had brought an eye patch. I wasn’t expecting the choices of beers though; Blue Moon is one of my favorites and served mega style, it’s even better. You can also order Hite and OB, Korean beer favorites.

And the Soju … oh, the Soju – with so many flavors, you need at least six people to order to sample everything. From yogurt to pineapple, all of the flavors are mixed very well, and if you’re not careful you won’t notice how many you’ve had – so, keep that in mind.

Once you get through what drinks you’re having, it’s on to deciphering the menu. I say decipher because most of the menu is written in Korean. But if you ask your server (whom, by the way, you can call to your table by pressing a button) what’s popular or even the guests at the next table, you should be just fine. While you wait for your order, snack on the complimentary sweet fried wontons and pickled cucumbers.

The food is actually very approachable, from potato skins, nachos, chicken wings and onion rings to Korean snacks like kim chi fried rice and my favorites: Pajeon (scallion pancake) and Duk Bock Ki, a spicy hodgepodge of rice cakes, beef strips and oyster sauce. The Cheesy Corn was satisfying, as was the spicy sausage and fries. Deep-fried squid (calamari) was probably the weakest dish of all the choices, but when you have onion rings and bacon wrapped mushrooms, it’s OK.

The Bulgolgi is pretty standard; it didn’t stand out like the appetizers. We ordered a pasta dish that I’m going to have to recommend you stay away from unless you like your pasta drowned in mass amounts of sauce. We tried the Fire Chicken, and all I can say is it so insanely hot that I will never try it again. I like to taste my food, and also be able to taste other things. The chicken felt like it was singeing off my taste buds.

Really, the appetizers and drinks are where Crazy Hook shines. The food is hearty and goes well with your giant orders of beer, but it’s best to stick to one of the packaged deals, otherwise, it can get a bit pricey.

Happy hour is where it’s at with these pirates. Served from 5 p.m. to 9 p.m. every night, most of the food is 50-percent off. That will help your pocket book.