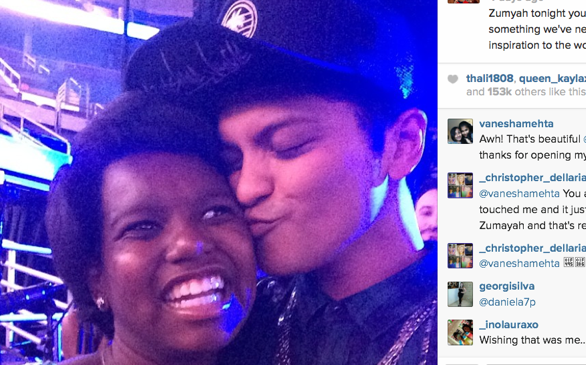 With Beyoncé supposedly changing her lyrics to one of her songs to call out Jay-Z on cheating and Robin Thicke brushing off tweets about his misogynist lyrics, there’s no doubt that there has been some controversy with music artists this past week.

But, while they’re dealing with their own problems, Bruno Mars has helped make a fan’s day.

Mars’ music reportedly aided in the recovery of an 11 year-old girl named Zumyah Thorpe from Ohio. In March 2013, Zumyah was in a car accident involving a drunk driver that was fatal to her pregnant mother and two of her sisters. Although she survived, she unfortunately suffered a coma and had brain damage so severe that doctors had to remove a part of her skull.

According to her doctors, 70 percent of people with the same damage as Zumyah’s do not survive, and most never regain their abilities to walk and talk. But, when Zumyah woke up and her doctor checked her motor and language skills, she surprised everyone when she said Bruno Mars’s name and sang all of the lyrics to his “Just the Way You Are.”

Her doctor commented on Zumyah’s amazing recovery. She told WKYC, “I am absolutely convinced that singing those Bruno Mars songs and being able to say 'Bruno Mars' is in itself a miracle and knowing all the words to the songs has helped her recover.”

Mars received news about how his music helped Zumyah and went out of his way to make her feel special at his concert in Cleveland on June 28. He met with her backstage and dedicated the last song of his show—“Just the Way You Are”—to her.

In a photo caption of an Instagram post (above) of him kissing Zumyah’s cheek, Mars wrote, “Zumyah tonight you gave my band and I something we've never felt before. you're an inspiration to the world! #WeLoveYouZumyah”

Mars isn’t the only celebrity that has gone out of their way to make fans feel special. Check out others who have done some pretty amazing good deeds that will restore your faith in humanity:

Miley Cyrus
In June, Miley Cyrus took a break from her busy tour schedule to send a special video message to a young fan an hour before she passed away. The fan, Caley Camarillo, was dying of cystic fibrosis and was a big admirer of Cyrus. Camarillo’s mother, in a post on Facebook, noted that Cyrus was “the very first celebrity that Caley was into and the very first celebrity she met.”

In the video, Cyrus told Camarillo: “I want to let you know that I’m still praying for you, I’m still thinking about you, I’m sending you some love, and I just want you to know that you on are on my mind and in my heart.”

Lady Gaga
Last December, Lady Gaga noticed an alarming post by a teenage girl on her website Littlemonsters.com hinting at suicide. Concerned, she took the time to reach out to the girl online. In a heartfelt post on the website, she tried to persuade the fan from County Offaly, Ireland to think twice before taking her own life.

Gaga wrote, “We all love you. Nothing is worth taking your life. Just remember how sad I would be, how sad we would all be. We are connected through the music and that is powerful. Listen to music and get creative with your life. You can be and become anything. You have more power than u think.”

Feeling supported and loved, the fan decided not to take her life, and thanked Gaga for her help.

Bradley Cooper and Julian Edelman
In April 2013, actor Bradley Cooper took a break from filming American Hustle and made time to visit the survivors of the Boston Marathon bombing alongside New England Patriot receiver Julian Edelman. One of the survivors—Jeffrey Bauman—was severely injured, having lost both of his legs below the knee during the explosion. In a picture that Julian Edelman tweeted of Bauman with himself and Cooper, he wrote, "Visited #survivor #stud #hero Jeffrey Bauman Jr. today. He was looking great and is a true inspiration. #strong.”

Blog
The Weeknd announces his ‘The After Hours Tour’ and album
1,271 views

Blog
Drake breaks his own No. 1 record with ‘Care Package’ compilation
1,722 views