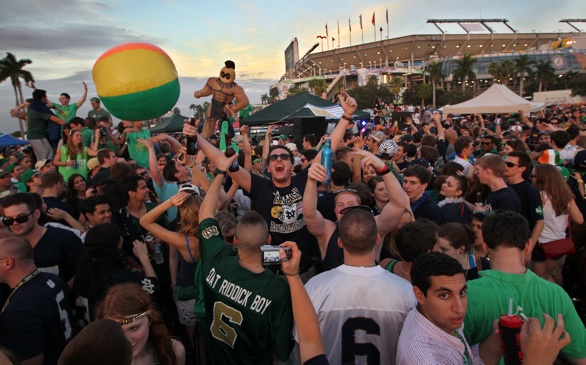 Thanks to a recent Quora thread, finally people are answering the one question many college students have on their minds: What is some advice that most college students are not likely to hear? (via Business Insider)

Quora users provided more than 140 answers, and we have to say, some of this stuff is pretty good!

So, we listed just a few of the best pieces of advice we found in the thread along with our commentary and additional advice gathered from personal experiences—read up, and take notes!

1. "Wash your sheets more than once a year." - MIT counselor Ben Jones (posted by Daniel Wetterstrom)
I don't know if it's because students are afraid to use the washing machine, they're clueless or they're just lazy, but so many of them just neglect to wash their sheets. Bed bugs are no joke; wash your sheets often.

2. "Make friends from all over the world." - Quora User
One year at USC, I lived on a floor that happened to house a whole bunch of foreign exchange students studying abroad from Italy, Spain, Denmark and Australia. That semester was one of the best semesters ever.

We partied with the exchange students almost every weekend, my roommates and I bonded with the girls (who cooked us delicious dinners from their homelands), the Danish guys taught us how to curse, and we had insightful, sometimes political conversations over beer. I not only learned so much about these different cultures, but I also learned a lot about myself.

So, if you have a chance to live with a foreign exchange student, do it! Or, join one of the cultural clubs on campus to meet people from around the world.

But of course, you can always just study abroad.

3. Don't feel pressured to join the Greek system if that's not your thing.
This is especially hard if you go to a school that is all about rushing a fraternity or sorority.

My freshman year, I definitely felt the pressure from my dorm mates to rush one of the sororities on the Row. However, when I learned more about the process and the financial responsibilities that come with rushing and pledging, I quickly discovered the Greek life was not for me.

But since my university had a large Greek system, nearly every girl I knew was in a sorority, making it a challenge to find friends who a) I could relate to and b) had free time to hang out outside of their sorority gang.

Well eventually, with a little patience and by forcing myself to get more involved, I found non-sorority girls who ended up becoming some of my closest friends.

Anyways, the bottom line is this: joining a sorority or fraternity is not the only way you can find lifelong "sisters" or "brothers" while in college.

4. "Take a gap year." - Quora User
As this Quora User explained, although "taking a gap year is viewed as a big 'no-no,'" every story I've heard about a college student taking a year off has always been positive. It may sound cliché, but yes, students do "discover themselves," mature and learn new things. And, I've heard arguments that taking a gap year could be one of the best decisions of a student's life.

5. Develop strong relationships with your favorite professors. Getting a "A" in a class does not grant you a letter of recommendation.
If you want killer letters of recommendation for internships, fellowships, grad school or future jobs, you need to put in the groundwork with your professors during your freshman year. This is something I wish I took seriously while in college.

After the semester is over, stay in touch with your professor via email, and stop by his or her office every now and then. If you see an article that relates to your professor's career field or something he or she used to lecture about, don't be afraid to forward the article to them.

Professors go through hundreds of students; if you don't keep in contact and make a lasting impression, they'll most likely forget you, and when you send an email asking for a letter of rec, they'll be like, "Um wait, who are you again??" Not good.

6. "Don't spend your entire college experience in the library and/or isolated with a significant other and/or in a major that you hate." - Chelsea Hunerson
I never spent that much time in the library, and I loved my major, but I admit isolating myself with my then-significant other was a HUGE mistake. Having a relationship while in college is not a crime, but when that relationship holds you back from making friends, getting involved or if it's causing you more stress than your school work, just break it off ASAP, especially when the break-up is inevitable.

7. "Don't go home every weekend." - Chelsea Hunerson
Another great piece of advice from this Quora user! You really do miss out on amazing events, parties and social opportunities when you leave campus every weekend. And honestly, how are you ever going to learn how to wash your clothes or sheets (see #1) if you keep going home so Mom can do your chores instead?

8. Just because everyone else studies in the library, that doesn't mean you have to.
Find your own personal study space that's free of distractions. Some people can get a lot done in the library, while others can't. Maybe you prefer studying in your dorm, the dining hall, a cafe or outside at a picnic table? It doesn't matter. Just figure out where you get the best studying done, and pop a squat with your books and laptop.

9. Avoid rooming with your friend.
Contrary to popular belief, best friends don't always make the best roommates. Trust me, I understand it's tempting to want to room with your bestie. At first, it sounds like a good idea, but then you realize that all of her little habits really annoy the crap out of you.

My sophomore year, I roomed with a close friend I made during freshman year. At first, it was fun, but then we had a disagreement about her boyfriend always coming over every weekend and sleeping in the same room as me. I voiced my annoyance, she didn't take it too well, and we stopped being friends halfway through the year. It was terrible.

So, my advice is this: If your school offers random roommate assignment, don't be afraid to go that route. You might even gain a new best friend through random assignment (FYI, this is how I met one of my closest friends to this day).

10. Networking starts now.
Again, this is a piece of advice I wish I heard when I was in school. If you enter the post-grad world without having "networked" first, your behind compared to other graduates.

While in college, you should be networking in the classroom with your classmates and professors. Network at your internships with your internship supervisors and your fellow interns, and within the student groups, clubs or organizations you belong in. And it's never too early to set up your LinkedIn page and attend networking events such as job fairs and mixers. Heck, you can even start making business cards now to pass out at those events!

11. "The hands you shake are more important than the grades you make." - Bryan Becker
Yes, grades are important, but in today's world, it really is about who you know instead of what you know. Learn the basics on making a good first impression when you meet someone new so they can be a future contact: be friendly, smile, make eye contact, have a firm handshake, and practice your "elevator pitch." Also, just be likable. Likability can get you very far in life.

If your college offers a class that focuses on any of these things, take it! At USC, it was called "Personal Selling," and it was the most valuable class I have ever taken.

12. "Do what you want." -  Benming Lian
If you want to take an out-of-the-box class, take it. If you want to sign up for a random club, sign up. If you want to spend a Friday night binge watching "Orange is the New Black" while eating a whole box of Oreos and drinking a bottle of Yellow Tail red wine, binge on! Or, if you'd rather spend that Friday night doing keg stands, playing flip cup or raging until 6 a.m., by all means, party it up.

Your four years at college go by quicker than you think—spend it doing the things you want to do rather than what your parents, friends and teachers expect you to do.

13. But, "YOLO is not a valid reason." - Aditya Rajan
Yes, you only live once, but that doesn't mean you should put your life at stake by doing something stupid or incredibly dangerous. Understand the consequences of your actions before you act. You're in college now; Mom and Dad won't be able to save you or bail you out of every terrible situation. So, just "YOLO" with caution.

College Lists
Here are Some of the Best Tailgating Colleges
4,598 views

College Lists
7 Tips for Dealing with Your Helicopter Parents While in College
14,434 views

College Lists
10 Truths About Snapchat Every College Girl Can Relate To
5,460 views