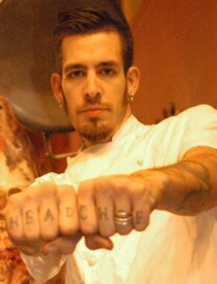 “Being the Executive Chef at your very first restaurant is challenging, but I'm always up for a challenge,” chef Michael Wray states with a confident manner and eager smile.

The 20-something phenom has been put in charge of downtown Los Angeles' new Tatou Supper Club. A little over two years ago, Wray was crowned victorious on the Fox reality show “Hell's Kitchen.”

There, Wray showcased his talents to Gordon Ramsey, one of the most unforgiving, tough-to-please chefs this side of London. The grand prize: Wray was to open his own restaurant. The price, however, wasultimately too high for the show's producers to follow through.

Instead, Wray was awarded a cash prize and all of the kitchen equipment used in the show. “Although I didn't win the restaurant, I will remain thankful for what I did win, especially the experience,” the gracious chef explains.

After the show, Wray worked even harder on perfecting his craft, studying abroad in Europe and in Las Vegas, a hotbed for up-and-coming chefs and restaurants. It was in this transition that he met renowned creator of entertainment clubs, Mark Fleischman.

Fleischman made a name for himself resurrecting the late '70s New York City haunt Studio 54 and also running Century City's The Century Club in the early '90s. In 1990, Tatou was making waves in NYC. Soon after, Beverly Hills, Aspen and Tokyo also hosted Tatou Supper Clubs, and now, the newest incarnation is in downtown L.A.

Together with Fleischman and managing partner J.D. Iriarte, Wray hopes to create an experience the new dining generation has not yet experienced. Though young himself, he runs his kitchen firmly and fairly.

“Everyone that works in that kitchen is there because they want to be,” he assures. “They all contribute their ideas and prospective. We run very smoothly back there.”

While speaking with Wray, I was surprised to learn that he employs women in the kitchen, as it's usually very tough for women to be in the business.

“I love that we have a female presence,” Wray explains. “It adds a nice balance.”

The Tatou cuisine is a fusion of Asian and Peruvian cultures. Wray hesitates at first when talking about the menu, stating that he tries to keep the creative wheel moving and “doesn't like to cook the same dish twice.” Understandable, but the menu is so eclectic that it probably makes up for repetition. Offering palate-pleasing charms like Sliced BBQ Pork with Asian Coleslaw ($8) and Lettuce Cups with Chicken in a balanced soy reduction ($8), the menu is also quite affordable.

“Our main business is the lunch crowd,” reveals Wray. “So we designed a menu based on quickness, but with an added sophistication.”

In addition to being a supper club, Tatou's dining room transforms into an enormous nightclub on the weekends. There are over 30 plasma TVs, three VIP Rooms and a dance floor that resembles something out of Prince's “Batdance” video from Tim Burton's Batman .

Speaking of which, Tatou stands where Prince's old haunt, Vertigo, resided, which explains the amazing acoustics and well thought out floor plan.

Date Night
Some first choices for dining in L.A. after last call at the bar
1,796 views