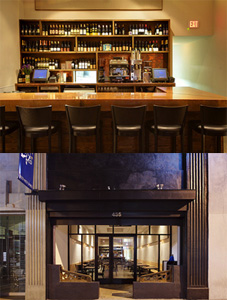 Jon Shook and Vinny Dotolo don’t look like they should be running one of the hottest new restaurants in the city. Maybe playing in a band or hanging out at the skatepark in Venice Beach, but not cooking up fine cuisine on an hourly basis. The two “food dudes,” as they’re known around town, sport tattoos, shaggy hair and scruffy beards. They talk about food with the same “totally awesome” enthusiasm that a surfer might describe a good break.

After years of working together in other people’s restaurants, doing shows for the Food Network and banging out gigs for their Carmelized Productions catering company, the dynamic dude duo have finally opened their own spot. The aptly titled animal (lowercase intentional) opened its doors in June, just up the street from famed Canter’s Deli.

Even without a sign, you can’t miss it. It’s the place with all the well-dressed Hollywood hipsters pulling up to valet parking. Despite the “dudes”’ winning personalities, it’s the food that does their talking. The restaurant was built around the concept of freeing the hungry beast inside each of us.

Succulent, rich and unabashedly flavorful, animal hits your palate full force with a list of meat entrees including Country Pork Ribs, Flat Iron Steak and a variety of fresh fish. I personally suggest the Fried Quail, which comes equipped with Anson Mills grits, cooked greens and slab bacon. The boys don’t mess around when it comes to flavor.

Try their melted Petite Basque served with garlic bread. This hors d’oeuvre has the likeness to the best, juiciest thick crust pizza, only it’s better, far better. The menu also boasts a variety of salads and delicately cooked fresh vegetables.

The dessert menu alone is cause for celebration. Try the white peach and blueberry crisp with whipped crème fraîche and tell me you don’t melt with orgasmic pleasure. Further proof that dining at animal will bring out the beast in you.