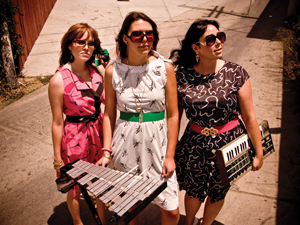 Early Influences: HOPUK’s music is shaped by the Riot Grrl movement of the early- to mid-1990s. When given a verbal checklist of some of the top names from the genre (Team Dresch, the Third Sex, the Fakes), Electra is hip to all of them.

Nowadays her tastes have expanded to include electronic acts like the Postal Service, Ratatat and Head Like a Kite.

On Women in Music: Gender politics play a role in nearly every facet of this world. The music industry is no exception. Although bands like Hole, Paramour and No Doubt have managed to slip through the cracks into heavy rotation, all-girl bands on indie rock radio are often a novelty – or scarce, for that matter.

Electra, however, sees her band’s lineup as a blessing, not a curse. The group has played opposite top names like Sleater-Kinney and shows no signs of stopping.

Making Music Videos: Hearts of Palm UK’s latest video for the single “Trust” features Austrian model Manuel Schwarz. Fashion followers may recognize this dark-haired 20-something as the face of campaigns for Von Dutch and Levi’s. Schwarz’s starring role in the clip came to him via an introduction by a mutual friend he shares with Electra.

The premise for the video places the blue-eyed hunk in a dangerous love triangle with the three members of HOPUK. When each of the girls realizes that he’s romancing all of them, they band together for revenge.

“We beat him up and leave him for dead and go off in our helicopter,” explains Electra.

Initially, the ladies had a different star in mind for the part.

“Our first choice was Brett from Flight of the Conchords,” she says.

Electra even managed to get the comedian-musician interested in the treatment for the video, but it just never panned out. Still, she’s thrilled with the end result.

“[Manuel] was really sweet,” she says. “I think we’ll be friends for a really long time.”

Childhood Dreams Realized: Electra’s dreams of being a musician have been realized a hundred times over. Still, she’s very energetic about things that other musicians might take for granted. For example, one of her greatest aspirations was obtained on a famous Los Angeles stage.

“When I was a kid, I had a list of things I wanted to accomplish, and playing Spaceland was one of them,” she confesses.

But in the grand scheme of things, she doesn’t discriminate when it comes to venues.

“They’re all good for different reasons,” she says.

Creative Process: Call it “electropop”; call it “poptronica.” Regardless of the label slapped on the music, it takes a rare talent to make it and to do it right. For Electra, the process of making her music begins at a very organic level.

“I would say [our songs] start with some kind of emotion,” she explains. “I just feel something in my heart and I just got to get it out.”

With her trusty keyboard, she builds a melody.

“Then I start to build a beat, like a sequence,” she adds.

She borrows her rhythms from the world of hip-hop, which is the easy part. The hard part for her are the words.

So what’s with the name Hearts of Palm UK? “We don’t talk about the UK,” she says slyly. “It’s our own little inside joke.”