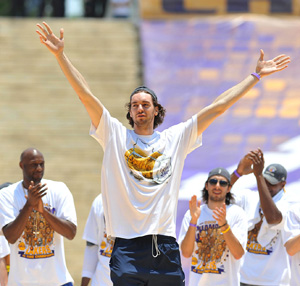 He is fair-skinned and has long, shoulder-length hair like Sasha Vujacic. He is on the upside of his basketball career and is considered one of the best players to come out of Spain. In fact, he started playing professional basketball at age 16, and his potential was considered so great, he was among the top picks in the NBA Draft.

Not to be confused with Ricky Rubio, fellow Spaniard Pau Gasol may be the greatest player to ever come out of Europe. He already has had quite the basketball career, winning several medals for his Spanish national team.

But, for good measure, Gasol has taken full advantage of the opportunity given to him now that he has such a large spotlight shining on him since donning the purple-and-gold of Lakers lore. In the last 12 months, the Spaniard converted that bright spotlight into a potential Hall of Fame career. Heck, I say he should be in on the first ballot!

Just look at the resume since the 2008 Games last August – a Silver medal with the Spanish national team in Beijing, an NBA championship with the Lakers in June and now a European basketball championship with his fellow Spaniards on Sunday.

Each of the milestones was not just a first for Gasol, but it was also a momentous occasion for his teams. Last year’s Silver medal finish at the Beijing Games was the second time the Spaniards finished second at the quadrennial event – the first time, coincidentally, was at the ’84 Games in Gasol’s current American home city of Los Angeles.

About 10 months later, Gasol helped the Lakers re-establish themselves as an elite team with their first NBA title in the post-Shaq era. Then, on Sunday, Gasol had a solid 18-point, 11-rebound, three-block performance in the title game of the European Championships, as the Spaniards defeated Serbia, 85-63. It was the first time the Spaniards claimed a Gold medal at the European Championships, with Gasol winning MVP honors.

Now, Gasol will return to Los Angeles, hoping to repeat as NBA Champion and adding to what is already a storied career, which includes a Gold medal at the 2006 FIBA World Championships and two Silver medals and a Bronze medal at the European Championships.

Of course, nowhere to be found was Rubio, but who is Gasol to complain? After all, he has now won on three levels – European Championships, NBA and the Olympic Games. Throw in an NBA Rookie of the Year award, two NBA All-Star selections and championships and MVP trophies in both the Spanish League and Copa del Rey Spanish Cup, and well, how does Gasol not make a case for the Basketball Hall of Fame when all is said and done?

While he became “relevant” after joining the Lakers in 2008, Gasol was already an accomplished player before heading on a plane due west from Memphis. The current and future accolades will only add to his aura, perhaps making him the greatest Spaniard to ever play basketball.

At age 29, Gasol still has about four or five years of top-grade basketball left in him. The potential of what hardware he can add to his showcase in that time frame is still high – perhaps another NBA championship or two, maybe another first-place finish at the 2011 European Championships, heck, even another medal at the 2012 London Games.

A 13-year basketball veteran, anything Gasol significantly contributes to the sport for the remainder of his playing days will make it difficult to not make a case for him to be a first-ballot Hall of Famer.