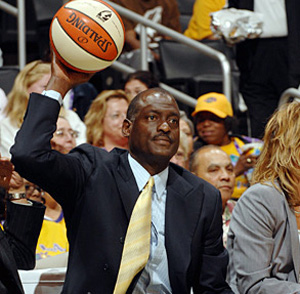 Lisa Leslie looks at me and smiles. She has been answering questions all morning at El Segundo’s Toyota Sports Center about her current state of mind, what with her professional basketball career officially coming to an end just two days earlier. Yet this question has nothing to do with her.

As she sits in this purple art deco chair in the corner of a conference room adjacent to the second floor offices of where the Lakers, Kings, Sparks and D-Fenders all do their business, Leslie seems to appreciate the lighthearted question I just threw her way.

OK, maybe she doesn’t appreciate it that much, but she definitely sports an innocent smile when I ask her whether she had a hand in convincing Michael Cooper to step down as Sparks coach, only to move a few blocks down the Figueroa Corridor to accept the X’s and O’s position at Leslie’s alma mater of USC.

“That was all him,” she utters with a gleaming smile on her face. “I had nothing to do with that.”

One thing is for sure: She was happy to have Cooper as a coach and mentor while playing with the Sparks, telling both myself and several other reporters how much she learned from him on the floor. Though, she is mum as to whether she would follow Cooper to Galen Center and join him as an assistant with the Women of Troy.

“I don’t know about that. Is there an offer on the table?” Leslie jokingly says in a raised voice, turning her attention away from me and toward Cooper who is standing just outside the conference room in the busy hallway, but still close enough to hear Leslie’s leading question.

Cooper does not respond, though it was unclear whether he is willfully ignorant to Leslie’s hints or if he is just so engrossed in saying his goodbyes to the Sparks personnel that he just does not hear the pleas of his now-former superstar player. Let us just hope he is too engrossed in bidding adieu to the Sparks, as Cooper walks away from coaching professional basketball in order to try his hand at the college ranks – a first in his career as a head coach.

“It’s time to do other things,” Cooper tells me. ”I had a great run here. They’ll go on [without me)]. I love challenges. That is one of the reasons why I even considered this.”

Certainly, his response provides no hints of coercion by Leslie, but Cooper apparently did not need any convincing. Apparently, he was sold when he looked at the team he would have in place upon his arrival.

“They have a very good team that carried over from last year; they are a team who likes to shoot the basketball. In college, it’s about putting the ball in the hoop, and we have a team who can do that. I think it’s fair to expect a [record of] 20-10 [next] season. They have a lot of young players who are, hopefully, receptive to what I have to bring there,” he remarks.

One person who struggled to be receptive was Noelle Quinn, the former UCLA standout who is now a starting guard with the Sparks. In fact, she expresses advice to Cooper as he takes over the helms with the Women of Troy.

“I think he’ll do a great job in college,” she says. “His excitement for the game will definitely shower down to everybody on his team.”

Cooper’s excitement for the game has already taken him quite far, what with eight championships in professional basketball and a WAC title in his senior season as a player at New Mexico. Now, the man who wore knee high socks will try his hand at imitating his winning ways on the professional stage with the Women of Troy.

Despite my loyalties to UCLA, all I can tell Mr. Cooper is: “Fight On!”