Does Lord Stanley Want to Be A King? 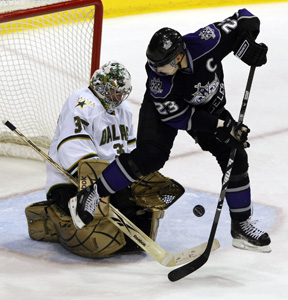 News Flash: The Los Angeles Kings are in first place atop the Pacific Division standings! Hey, maybe the Kings were onto something when they told their minions at the team’s Hockey Fest at L.A. Live last month that this season would be something special. Then again, Stanley Cups are not won in October.

The Kings are in an interesting predicament. Technically speaking, they have won four of their last five regular season games – including a cool shootout victory over the San Jose Sharks in the season finale at Staples Center last season. Oddly enough, their only loss was in their very next game at Staples – the home opener against the Coyotes.

As of today, the Kings are at the top the Pacific Division at 4-1 with eight points, while the 2-2 Coyotes are staking claim to the title of cellar dweller with four points. Sure, things will change in the next six weeks, let alone the next six months. The 3-2 Sharks and 2-2 Anaheim Ducks, with six and five points, respectively, could rise to the top and duke it out for the top two spots in the division.

This sets the stage for a potential third-place division finish for the almost-mighty Kings. The question is whether that is good enough.

Naturally, any player or fan will tell you the only thing that is “good enough” is a championship banner, something the Kings have not been anywhere close to since the Wayne Gretzky-led squad of 1993.

Well, 16 years later, Gretzky was run out as head coach of the Coyotes – and the franchise may not be too far behind him – but where, exactly, do the Kings stand as an organization? After all, this team has not won a playoff game since 2002 (coincidentally with a third-place divisional finish during that season). In fact, since winning Game 1 of the 1993 Stanley Cup Finals, the Kings lost 14 straight playoff games before defeating the Detroit Red Wings in 2001 – the only series win since the 1993 Conference Finals against Toronto.

So, after losing their next two playoff series to the Colorado Avalanche and following up with a seven-year playoff drought (including one lockout season), what makes the Kings so certain this season will be any different? Especially since the team has apparently found the Fountain of Youth after the 2002 season and has been in seemingly perpetual rebuilding mode.

But something is definitely different coming into this season. Attending last month’s Kings Hockey Fest, it seemed, to a certain degree, that there was a different kind of rumbling. Walking around Nokia Plaza a few weeks before the puck dropped on Oct. 1, there was a different kind of energy. Winds appeared to be a changing. The mantra of “wait until next year” seemed to be dissipating.

No one is counting on the Kings to actually ascend to the top of North American hockey within the next six months, especially with deep, experienced franchises such as Detroit, Pittsburgh, Boston and Chicago standing in the way. Nonetheless, the Kings believe they have something special on the ice this season, especially with a solid core they have that is chomping at the bit to actually put an end to this entire “wait until next year” talk.

One little sliver of the Hockey Fest provided just enough insight to what Los Angeles is trying to achieve this season: parlay the team’s youth and chemistry into in-game results, thereby assuring fans whose butts are casually filling those black and purple seats at Staples Center that the Kings really are trying to put a winning product on the ice.

The talent is definitely there, with a respectable balance of upstart youth and experienced wisdom. All the Kings really need to work on this season is goaltending (The verdict is still out on Quick.) and playing at full strength (The team was dead last in 2008-09 in 5-on-5 scoring.).

If the Kings can tighten a few screws this season, there is hope for them to make the playoffs. Of course, once in the playoffs, anything can happen, so do not count out any semblance of a deep Stanley Cup run if Los Angeles can finish among the top eight out West.

Four players – Kopitar, Matt Greene, Wayne Simmonds and Teddy Purcell – all tried to say as much at the Kings press conference designed for fans ages 12 and under at Hockey Fest ’09, assuring their youthful followers that the team’s relatively young age will not be a hindrance to progress this season.

So far, the Kings are off to a decent start, winning four of five games despite allowing 15 goals against 19 goals favored. Certainly, the Kings have proven they can score on the ice. But, whether they will score with the fans, well, the jury is still out.

Still, the good feelings felt at the team’s Hockey Fest ’09 may actually have some substance, and maybe, just maybe, the Kings will at least earn a playoff berth in March. Just do not hold your breath for a Ducks-Kings playoff meeting. Well, not yet, at least.