Stepping on the Gas 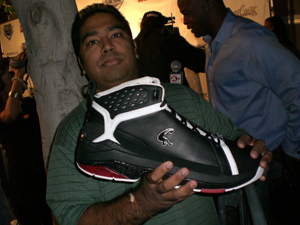 Lakers center Andrew Bynum, 21, signed a four-year, $57.4 million extension on Oct. 30, keeping him in Los Angeles until 2012. Bynum will earn $2.8 million this season. The extension includes a team option for a fifth year worth $16 million.

In the first half, the Huskies had only two first downs, passed midfield for the first time with about two minutes left in the second quarter and amassed 35 yards of total offense. The Trojan defense also had three interceptions in the route.

The Lakers won their first three games of the season, thanks to a team defense that held each opponent to less than 100 points – including to below 80. In those three games, the Lakers’ margin of victory was 21.67 points.

After a 1-5 start, the Ducks won six of seven games to improve to 7-5-1. The sole blemish during the seven-game stretch was a 7-6 overtime loss to Vancouver Oct. 31. However, only one of those games – a 6-4 victory over Montreal – was decided by more than one point. Offensively, the Ducks scored 31 points in the past seven games.

The former defensive player of the year is expected to make his Clipper debut this week. Camby, who suffered an injury during the off-season, came to Los Angeles via a trade with Denver during the summer.

Odom’s days as a Laker appear numbered after Bynum signed his four-year extension. With last week’s deal, the Lakers are committed to $75 million in salary next season. A free agent in June, Odom expects about $10 million per year in his next contract.

The Lakers are already well over the luxury tax threshold. This season, the Lakers expect to pay more than $11 million in luxury tax, jeopardizing a possible Odom deal.

The Los Angeles Clippers reported that Baron Davis will miss a few games due to a sore left hip. Coincidentally, Davis is still recovering from a sprained left ring finger suffered during the preseason.

The Dodgers’ general manager will meet with Ramirez’s agent, Scott Boras, this week at the general manager meetings in Dana Point. Both sides are expected to discuss whether Ramirez, a free agent, will re-sign with the Dodgers. Boras seeks a six-year deal for Ramirez, while the Dodgers reportedly seek a two- or three-year deal.

After a decent start to the new season, the Kings have lost four straight games heading into an election match-up against rival Anaheim. In four games since Oct. 25, the Kings were outscored 16-9, losing all four games. Three of those losses were by one goal, including a 4-3 overtime loss to defending Stanley Cup champion Detroit.

Despite a 6-0-1 record in its last seven games, Anaheim is barely winning its games. Six of the seven games were decided by one goal. In that stretch, the Ducks allowed 24 goals.

Two key skaters are on the bench for Anaheim – left wing Brad May (strained right knee) and right wing George Parros (scratched cornea). Both players are expected to return soon, though the team is prepared to call up a minor leaguer to be safe.