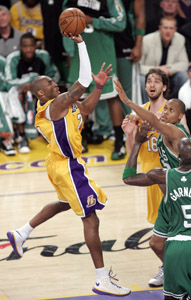 It was the first time all season the Lakers (7-1) gave up more than 100 points in a game. Bryant led all scorers with 29 points.

The Pistons had a balanced effort, including 25 points, 13 rebounds and two blocks from Rasheed Wallace and 25 points on 7-for-12 shooting for Allen Iverson.

Brown, traded from the Lakers to Memphis last January, returned as a Piston, scoring 10 points and grabbing 10 rebounds in his first game against the Lakers at Staples Center.

The next day, ex-Clipper Maggette faced his former team when the Clippers hosted the Warriors. He scored 17 points in 26 minutes, despite having three fouls in the first quarter.

Former Laker Turiaf, also a Warrior, played at Staples for the first time since Game 5 of the NBA Finals. He was scoreless but had five rebounds in 12 minutes.

Undrafted Georgia Tech guard Anthony Morrow lit up the Clippers for 37 points and 11 rebounds on 15-for-20 shooting in the Warriors 121-103 victory at Staples Center Nov. 15. Morrow’s 37 points were the most ever for an undrafted player since the NBA went to two draft rounds.

Entering Saturday’s game against the Clippers, Morrow only scored 23 points all season.

“It was one of those things where I caught fire,” Morrow said after the game. Coincidentally, it was Morrow’s first career start.

UCLA Basketball began its quest for a fourth consecutive Final Four berth with consecutive victories over Prairie View (82-58) and Miami-Ohio (64-59).

No. 6 USC defeated Stanford, 45-23, to inch closer to another PAC-10 championship and berth in a BCS game. The Trojans (9-1, 7-1) also have an outside chance at a national championship game if they defeat Notre Dame and UCLA, and one or more teams in the BCS Top 5 lose.

Coach Rick Neuheisel returned to Seattle, where his Bruins (4-6, 3-4) defeated Washington, 27-7, to keep the team’s bowl chances alive. UCLA must defeat Arizona State and USC to qualify for a bowl game.

Erik Ersberg got the call to defend the net for the Kings, who have been 3-3 since he stood in front of the goal. Two of those losses were to Anaheim.

The Ducks also made a change in goal. Regular Jean-Sébastien Giguère had the day off, and Jonas Hiller filled in with his first career shutout, as Anaheim defeated the Kings, 2-0, at Honda Center.

“I’m a totally different player than Chauncey Billups. I’m a lot more aggressive driving to the basket.” —Allen Iverson to Campus Circle after his recent trade to Detroit Pistons

The Sports Wanderer
Welcome to the Pacific-12
44,496 views

The Sports Wanderer
Gagne With the Wind
2,015 views

The Sports Wanderer
Godzilla Dons Halo in The Bronx
2,117 views

The Sports Wanderer
Jerry Busses to the Famed Hall
1,981 views

The Sports Wanderer
A Bleeding Heart for Vinny
2,826 views

The Sports Wanderer
No Angels In This Bracket: 2010 March Madness
1,963 views