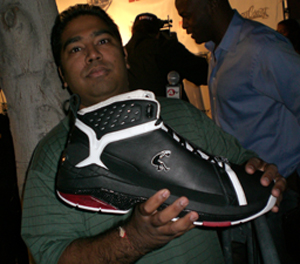 The basketball world lost a legend when Pete Newell passed Nov. 17. He was 83. Playing his college basketball at Loyola Marymount, Newell was briefly general manager for the Los Angeles Lakers. After retiring from coaching (including stints at San Francisco, Michigan State and California), Newell ran a series of basketball camps. Some of the biggest men in the sport attended his camps, including former Laker Shaquille O’Neal and former UCLA standout Bill Walton.

Chad Billingsley reportedly stepped out the front door of his home in Pennsylvania, only to slip on a slab of ice and break his foot Nov. 21. He underwent surgery the next day, as doctors inserted a metal plate into his fibula, according to Billingsley’s agent. Doctors report Billingsley’s estimated recovery time will be six weeks, while Dodgers press manager Josh Rawitch told reporters the pitcher should be ready for spring training. Billingsley was 16-10 with a 3.14 earned-run average last season.

3) Randolph’s nose is red … and blue and white.

Zach Randolph is switching coasts, as he was traded Nov. 21 from the New York Knicks to the Los Angeles Clippers. Joining him will be teammate Mardy Collins. In exchange, the Clippers parted ways with Tim Thomas and Cuttino Mobley. Randolph is expected to fill the void left by Elton Brand, who left the team during the off-season. The pudgy power forward averaged 20 points and 12 rebounds in 14 games this season in New York.

6) Less is more for Lakers.

Head coach Phil Jackson is managing his players’ minutes quite well through 12 games, with no player averaging more than 34 minutes this season. Bryant actually is second in team minutes at 33 per game, trailing Pau Gasol.

One week and a half before the biggest football game in Los Angeles, UCLA and USC set a new record in the other football. About 3,114 fans filled UCLA’s Drake Stadium Nov. 22 – the largest crowd ever for a women’s soccer game in Southern California, as the Bruins (21-0-2) and Trojans (16-5-2) squared off against each other in the NCAA Round of 16 game. The Bruins won, 1-0, on a goal by Kristina Larsen in the 13th minute. UCLA, who hosts Duke Nov. 29, hopes to clinch its sixth consecutive trip to the College Cup.

The basketball Bruins (who lost to unranked Michigan earlier in the week) claimed third place at the 2K Sports Classic Benefiting Coaches vs. Cancer in New York City Nov. 21. Fourth-ranked UCLA improved to 3-1 with the win. Senior center Alfred Aboya led the way with a career-high 22 points in the 77-60 victory over Southern Illinois.

Former UCLA football player Chris Joseph, a three-year starter from 2005 to 2007, earned a Rhodes Scholarship, it was announced last week. He will pursue studies at England’s Oxford University.