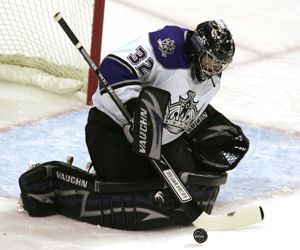 Next up is Andruw Jones, who finalized a deal with the Dodgers to restructure his contract, saving the team $12 million and allowing the team to trade him with a cheaper contract. Still questionable is Manny Ramirez’s return. He was recently offered a four-year deal from the San Francisco Giants.

With six pitchers gone, who will stand tall on the mound? As it stands today, Chad Billingsley will probably be the team’s ace, followed by Hiroki Kuroda and Clayton Kershaw. Jonathan Broxton will likely be the team’s full-time closer.

Journeyman pitcher Claudio Vargas, 30, signed with the team last week and will compete for the fifth spot on the rotation. Hong-Chih Kuo, Jason Schmidt and Jack Johnson will also compete.

On the bright side, the Dodgers picked up Casey Blake, Mark Loretta and Adam Dunn – all solid hitters.

While the Dodgers made little attempt to replenish their pitching stock in 2008, the Los Angeles Angels of Anaheim found a replacement for departed closer Francisco Rodriguez – former Rockies closer Brian Fuentes.

So Long to USC Offense and UCLA Defense

Well, not really – more like goodbye to Trojan offensive coordinator Steve Sarkisian and Bruin defensive coordinator DeWayne Walker. With college football wrapping up its 2008 season, both will be head coaches at other schools in 2009, with Sarkisian replacing Ty Willingham at Washington, and Walker resuming duties at New Mexico State.

So Long to the Goalkeeper

Following Sarkisian to the Pacific Northwest is goalie Jason LaBarbera, who was traded by the Kings to the Vancouver Canucks for a seventh-round pick in the June entry draft. The trade allows the team to give more playing time to who they think will be a stud – Jonathan Quick, who will split time this season with Erik Ersberg.

True to his name, Quick was quick to make an impact. In his first game since the trade, Quick stopped 31 shots in 65 minutes in his first-ever shootout game, a 2-1 victory for the Kings over the Philadelphia Flyers.

The Associated Press named Candace Parker the female athlete of the year. The 22-year-old WNBA standout for the Los Angeles Sparks is fresh off an amazing rookie season. In 2008 alone, she snatched rookie-of-the-year and MVP honors. She was also the first pick of the 2008 WNBA draft after she helped her alma mater, Tennessee, win its second consecutive national championship.

A local sailor who won a gold medal in the 2008 Paralympic Games died due to complications with Lou Gehrig’s disease Jan. 2, according to sources. Nick Scandone, who grew up in Huntington Beach and lived in Fountain Valley, was 42.

Scandone was the flag bearer for the United States during the opening ceremony of the international competitions for disabled athletes at Beijing held weeks after the Summer Olympics.

A memorial service is planned for Jan. 18 at 2 p.m. at the Balboa Yacht Club, located at 1801 Bayside Drive, Corona del Mar.