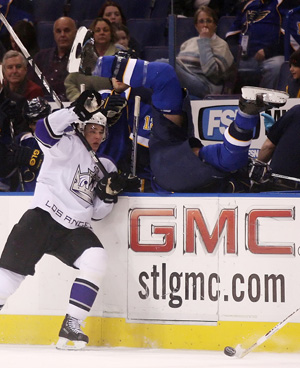 Dustin Brown of the L.A. Kings, flipping a competitor over the boards, is headed to the All-Star Gam
(Credit: Chris Lee/St. Louis Post-Dispatch/MCT)

If you have the flu and find yourself in a doctor’s office with some rather tall people, do not be alarmed. Professional basketball players need medical attention, too.

In case you have not heard, Chris Kaman joins Baron Davis and Ricky Davis in the doctor’s office with a strained left arch, keeping him sidelined through at least the All-Star Game. All three players are expected back in time for the team’s second-half push for lottery positioning.

The Los Angeles Lakers found out their players are not immune to the injury bug. Forward Lamar Odom already missed a week’s worth of action due to a bone bruise, joining teammates Luke Walton and Jordan Farmar on the shelf. All three are expected back in time for the team’s second-half push for playoff positioning.

While the Lakers and Clippers duke it out for who will have the most injuries in January, UCLA and USC took to the hardwood last weekend for bragging rights.

In the women’s game, neither school had anything more to fight for than bragging rights. After all, the Lady Bruins and Lady Trojans have nothing on their rivals to the north, Stanford and California. The Bay Area schools are ranked in the top 15 of the AP Women’s Top 25. The ladies of UCLA and USC have no idea such a ranking exists, though the Lady Bruins will gladly accept an 87-75 victory at the hand of their crosstown rival.

The battle of the men’s programs have a little more on the line, as UCLA solidified its position in the Top 10 of the AP Men’s Top 25 poll at the expense of USC. A nailbiting, 64-60 road victory for UCLA may help the school make its case to be a Top 5 program.

Does anyone ever wonder if the Boston Red Sox and Los Angeles Dodgers should just switch sides? The Dodgers roster in recent times was peppered with former Red Sox, including Manny Ramirez, Derek Lowe, Nomar Garciaparra and Bill Mueller.

Too bad Mike Scioscia is no longer wearing Dodger Blue, either. Instead, he will be wearing Angel Red through 2015, as the Los Angeles Angels of Anaheim extended his managerial contract for another six years.

Scioscia must be happy he is still coaching. The same could not be said of an unfortunate situation in Westchester, where the Loyola Marymount head basketball coach, Bill Bayno, announced his resignation on Monday due to a “serious medical condition … related to the stress and anxiety of head coaching.” The Lions were 1-16 at the time of his resignation.

Bayno was succeeded by Max Good.

The Anaheim Ducks traded winger Brad May to the Toronto Maple Leafs for a conditional sixth-round draft pick – on the condition that May re-signs with team during the off season. Last week’s deal saves the Ducks $600,000 in salary. No word whether management will use that money to bail out Disneyland employees.

Forward Dustin Brown will not be leaving the Los Angeles Kings any time soon, but he will be flying out to Canada in the near future – to play in the All-Star Game in Montreal.

The Sports Wanderer
Welcome to the Pacific-12
44,350 views

The Sports Wanderer
Gagne With the Wind
1,906 views

The Sports Wanderer
Godzilla Dons Halo in The Bronx
2,031 views

The Sports Wanderer
Jerry Busses to the Famed Hall
1,851 views

The Sports Wanderer
Get Rid of the Clippers
2,324 views

The Sports Wanderer
A Bleeding Heart for Vinny
2,722 views

The Sports Wanderer
No Angels In This Bracket: 2010 March Madness
1,867 views

The Sports Wanderer
Kobe Opting Out of Los Angeles
1,879 views

The Sports Wanderer
The Golden OC and the Silver L.A.
2,681 views