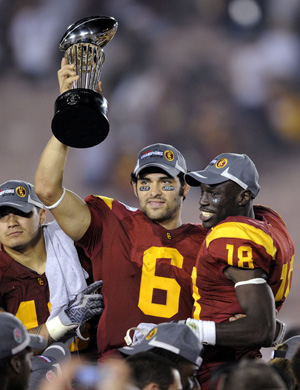 The city of Phoenix is breaking out in party, and it’s all UCLA’s fault. If the Bruins did not chase Kevin Love so hard, perhaps James Harden would not be playing in the Phoenix area.

UCLA recruits were a mainstay at Artesia High School (think Jason Kapono and Ed and Charles O’Bannon). Odds are, if Love did not come to UCLA, Harden would have.

If NBA scouts did not chase fellow PAC-10 freshman standouts Love and Jerrod Bayless so hard, perhaps Harden would not have enjoyed his last trip to Los Angeles.

On Saturday, the former Lakewood Artesia standout scored 24 points against UCLA, including the go-ahead basket in Arizona State’s 61-58 overtime victory over the Bruins at Pauley Pavilion.

Sure would be nice if Harden did this every night at Pauley – wearing a UCLA jersey. While Love is currently struggling as an NBA rookie, Harden is one of college basketball’s best players heading into March Madness.

The only madness is figuring out how UCLA passed up Harden tag teaming with Nick Collision and Josh Ship instead of reminiscing on the good old days with Love clogging the middle.

Speaking of madness, what about the hoopla surrounding the war of words over at University Park?

Is Matt Mustain secretly popping open a bottle of champagne?

What ever happened to Mike Williams?

For those who do not remember, Williams was the last player who left USC early despite Carroll’s protest. Today, he is no longer in the NFL. Who is disappointed now?

Then again, perhaps Williams is happy to be out of the NFL. The team that drafted him, the Detroit Lions, finished 0-16 in 2008. It is doubtful Williams would have made a difference.

Is this a bad omen for Sanchez?

Carroll gave his blessings to Carson Palmer, Reggie Bush and Matt Leinart – all contributors to national championship teams and Heisman winners. All were first round draft picks. None are major contributors in the NFL.

Sanchez’s predecessor, John David Booty, has yet to receive his first NFL snap.

Yet Sanchez thinks he will fall on his feet as a pro, even though Carroll thinks the quarterback needs another year.

Leave it to Sanchez, but perhaps Carroll knows best.

Many Dodger fans thought they knew best when they opposed a 2004 trade with Florida, in which reliever Guillermo Mota was shown the door for Brad Penny.

Funny thing, karma is. Mota will be charging out of the bullpen at Chavez Ravine again, just moments after Penny was charged out of Los Angeles. No word on whether Paul Lo Duca or Juan Encarnacíon are back in town.

There was also no word on when the Los Angeles Kings will find the victory column. After defeating the Anaheim Ducks, 4-3, on Jan. 8, the Kings dropped four straight to New Jersey, Tampa Bay, Detroit and Dallas. Perhaps ownership will consider changing the team’s nickname to the L.A. Paupers.

Further down the tunnel in Staples Center, the Los Angeles Clippers’ locker room has been re-built. Apparently, it is now a shrink’s office that doubles as a doctor’s office.