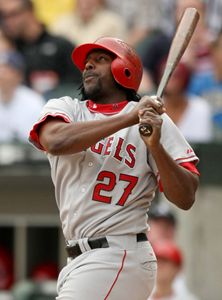 Spring training is around the corner. Wonder what kind of training is going on in Anaheim?

If you are Vladimir Guerrero, the Los Angeles Angels of Anaheim hope it’s the type of training that involves strengthening of the knee. The Angels have reportedly requested Guerrero focus more on rehabilitating his surgically repaired knee than taking at-bats in the 16-team World Baseball Classic in March.

Guerrero was one of 16 Angel players selected to represent nine countries in the World Baseball Classic. The right fielder was invited to play for his native Dominican Republic.

However, an invitation is not a guarantee to play, as teams do have the right to prevent a player from participating in the classic if he is recuperating from injury. The Angels have expressed they intend to exercise their right if Guerrero starts heading toward the batter’s box wearing the jersey of his country.

Oh, apparently catcher Mike Napoli, who was added to Italy’s 45-man roster, faces a similar battle. He had shoulder surgery during the off season, and the Angels probably want him to focus on recovery instead of redemption.

No word on whether the Angels will prevent the other 14 invitees from their roster from playing in the classic, including: infielder Maicer Izturis and outfielder Juan Rivera (Venezuela); pitchers Scot Shields, John Lackey and Brian Fuentes (United States); pitchers José Arredondo and Ervin Santana (Dominican Republic); and infielder Freddy Sandoval (Mexico).

Meanwhile, over at City Hall, the Anaheim council is training itself to get used to the Angels’ legal name. Team owner Arte Moreno infamously changed his club’s name to the Los Angeles Angels of Anaheim in 2003. The city subsequently sued, arguing the name change violated a lease provision between the city and team.

In 2006, an Orange County jury agreed with Moreno, saying the name change did not violate the lease. A subsequent appeal was also shot down.

Since, city officials were pondering whether to take the matter to the California Supreme Court. Last week Anaheim decided to end its four-year, $4 million legal battle. Not thrilled with presenting its residents with the legal bill, Anaheim is considering filing a request for a federal reimbursement.

How come hockey players never train themselves to play some defense in all-star games?

On Sunday, the NHL’s top players met in Montreal. Apparently, they all wanted to play a game, but a goalie was nowhere to be found.

How else do you explain these high-scoring all-star games, including the 12-11 final at the 2009 NHL All-Star game at Montreal’s Bell Center on Sunday night?

We are told some goalies did play, including Anaheim’s Jean-Sebastien Giguere. He must have forgotten how to play, considering the Eastern All-Stars spurned him for four of their 12 goals.

On the bright side, three of Giguere’s teammates helped the cause against the goalie, with Ryan Getzlaf and Rob Niedermayer each collecting an assist for the west. Putting his hatred for the Ducks aside, the Kings lone All-Star, Dustin Brown, also had an assist.

The Sports Wanderer
Welcome to the Pacific-12
44,491 views

The Sports Wanderer
Jerry Busses to the Famed Hall
1,973 views

The Sports Wanderer
Get Rid of the Clippers
2,421 views

The Sports Wanderer
A Bleeding Heart for Vinny
2,822 views

The Sports Wanderer
Kobe Opting Out of Los Angeles
1,963 views

The Sports Wanderer
The Golden OC and the Silver L.A.
2,781 views