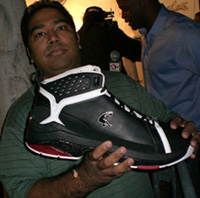 UCLA Head Coach Ben Howland was frank about his team’s performance against Stanford in the post-game press conference.

Howland was not criticizing his team’s play and clarified what he was talking about.

“It all starts with our defense,” Howland said.

On Saturday, the Bruins crushed Stanford, 97-63, behind the combined efforts of Collison, Jrue Holiday and Alfred Aboya. All three scored 15 points, and Howland cleared his bench in the final minute of the second half.

Here is to hoping UCLA defense is this boring (and intense) against USC Feb. 4.

Speaking of boring, negotiating a baseball contract isn’t necessarily exciting, especially when both player and team agree to go Dutch.

Angels of Anaheim club officials announced they reached an agreement with infielder Maicer Izturis, signing the shortstop to a one-year, $1.6 million contract.

Club officials also announced they will pay Itzuris an additional $100,000 if he has 550 plate appearances.

The Clippers are starting to resemble those perennial losers in Phoenix. You know, the Arizona Cardinals?

Of course, the Clippers can only hope to do half of what the Cardinals did this past NFL season. Hats off to the franchise with the second-longest championship drought (61 years) in all North American professional sports, as the Cardinals valiantly pushed the Pittsburgh Steelers to the limit.

On Sunday, Arizona almost claimed victory in Super Bowl XLIII, too bad for them that Ben Roethlisberger found Santonio Holmes in the back of the end zone for one of the greatest plays in the game’s history, giving Pittsburgh championship No. 6. The Cardinals are still waiting for their first NFL championship like a lost hiker waiting for water in the middle of July in the Arizona desert.