News from the Sports Desk 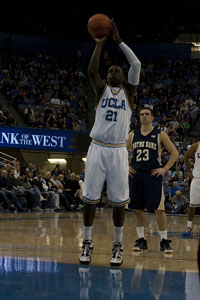 It is a great time to be a basketball fan in Los Angeles. In one weekend, one team won two huge games to claim the best record in the NBA, while the other team needed two lopsided victories to avoid claiming the league’s worst record.

On Feb. 7, as it was raining cats and dogs in Los Angeles, it was raining three-pointers in Memphis. The Clippers nailed a franchise-record 16 treys from behind the arc to defeat the Grizzlies, 126-105. The victory ended the team’s seven-game skid, part of a 2-21 stretch.

The next day, the Clippers rode the coattails of Al Thorton (31 points) and Zach Randolph (25) in a 126-95 victory in Atlanta. It was the first time Los Angeles won back-to-back games since Dec. 16.

At 12-39, the Clippers hope to continue distancing themselves from Washington and Sacramento in the NBA cellar – which may or may not be a good thing. The upcoming draft class is potentially weak, so there is little incentive owning the league’s worst record in order to have the best odds at owning the top pick in the 2009 NBA Draft.

Oddly enough, a few players from the other side of town may very well be in that Draft, as the UCLA Bruins’ basketball team is beginning to peak at the right time.

After losing to Washington nearly two weeks ago, the Bruins (19-4, 8-2 in conference) bounced back with four consecutive victories over rivals California, Stanford, USC and Notre Dame. The Bruins’ margin of victory was more than 22 points, including a 34-point pounding of Stanford and a 26-point grounding of Notre Dame. And USC lost to UCLA by 16 points.

In the four victories – all at home – guard Jrue Holiday made his case to be a high draft pick, as he averaged 12.3 points, 6.3 rebounds, 4.3 assists and two steals per game.

Back to downtown Los Angeles, the Trojans can thank the schedule-makers for commiserating their latest loss to UCLA, as USC would not face another opponent for eight days. That might not be such a bad thing.

The last time USC had a long break in its schedule was just two months ago. After losing a heartbreaker to then-sixth-ranked Oklahoma (at Norman, Okla.), the Trojans had an 11-day layover. USC returned home to Galen Center Dec. 15, rebounding against Pepperdine in a blowout 91-77 victory.

Southern Cal certainly hopes history will repeat itself. After losing to a ranked UCLA team Feb. 4, USC (15-7, 6-4) returns to the court Feb. 12 at Arizona. The game has added importance, as both teams are fighting for position. Both teams are neck-in-neck in conference standings. (Arizona is 6-5 in PAC-10 play, 16-8 overall.)

Of course, none of this really matters. Both schools are going to the PAC-10 Tournament at Staples Center in about three weeks, where a strong showing will likely result in an invite to play in March Madness. Until then, basketball fans hope to stay dry in this winter madness of rain drenching the streets of Los Angeles. Thankfully, basketball is an indoor sport.

The Sports Wanderer
Welcome to the Pacific-12
44,603 views

The Sports Wanderer
Gagne With the Wind
2,106 views

The Sports Wanderer
Godzilla Dons Halo in The Bronx
2,201 views

The Sports Wanderer
Jerry Busses to the Famed Hall
2,067 views

The Sports Wanderer
Get Rid of the Clippers
2,501 views

The Sports Wanderer
A Bleeding Heart for Vinny
2,908 views

The Sports Wanderer
No Angels In This Bracket: 2010 March Madness
2,047 views

The Sports Wanderer
Kobe Opting Out of Los Angeles
2,059 views

The Sports Wanderer
The Golden OC and the Silver L.A.
2,860 views