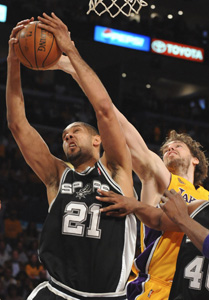 The bi-annual “Courting the NBA to Anaheim Bowl” completed its 2008-09 tour on March 2, when the San Antonio Spurs played the Los Angeles Clippers at Staples Center for the last time this season.

It was the perennial battle of two Western Conference teams going in opposite directions, with the Spurs chasing one California team (Lakers) for the league’s best record, while the Clippers are chasing another California team (Sacramento Kings) for the worst mark in the Association.

To think, this could have been a potential match-up pitting two Southern California teams not named the Lakers. Oh and when the Spurs were not so busy up-ending the Clippers in Harlem Globetrotters versus Washington Generals-style, the race for Western Conference supremacy would have been a battle of Los Angeles versus Orange counties.

Ever since it opened in 1993, officials at the Honda Center and with the city of Anaheim made no bones about luring an NBA franchise to town. Before Staples Center opened, the arena actually served as a home court for a few Clippers regular season games, raising the specter that if any team moved to the area, it would be Donald Sterling’s team.

Hopes of the NBA in Orange County were dashed in 2000, when the Clippers signed a lease with Staples Center.

Anaheim was at the center of swirling NBA rumors again in 2001-02, when the Spurs sought to leave the cavernous Alamodome for a more basketball-friendly arena. City and stadium officials apparently approached the team, making its case as an NBA-ready arena in a major media market. Of course, the city of San Antonio came up with the funds to build AT&T Center and keep the Spurs in town.

In actuality, the likelihood of the Spurs leaving San Antonio was about as high as the Lakers retiring D.J. Mbenga’s jersey. Yet the mere thought of having a third NBA franchise in metro Los Angeles was rather tantalizing.

The Spurs went on to win three league championships since its move into the AT&T Center. Imagine if those titles were celebrated in Anaheim, instead? Then, Southern California would finally have a true professional sports rivalry, with two teams in the same sporting league competing with each other to win the same trophy in the same season.

What a rivalry it would have been! Seven of the last 10 NBA championships were won by the Lakers and Spurs, with the Spurs winning three after moving into its new digs in San Antonio. How cool would it be if those three titles happened after the Spurs moved to Anaheim?

How much greater could it have been to see two teams battling atop the Western Conference standings playing in the same media market? Imagine watching Tim Duncan or Tony Parker hoisting the O’Brien trophy and giving the Lakers chalkboard material for the next season.

It would be nice to hear Duncan provide Campus Circle quotes such as this one on a regular basis: “After last night, putting up a subpar effort out there, coach expected us to put a better effort tonight. I think we did that.”

That Derek Fisher game-winner with .4 seconds left in regulation at AT&T Center in 2004? That could have happened in Anaheim!

Granted, we still have the Clippers. Blowout home losses to the Lakers or Spurs, such as the one played here at Staples Center, would still occur. But still, with both Lakers and Spurs legitimate title contenders for most of this decade, Los Angeles could have been a boon for Southern California sports.

Ah, what could have been!