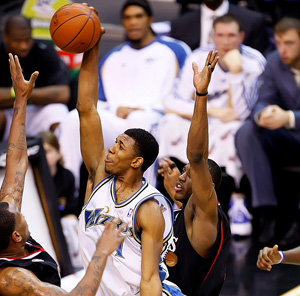 March is almost over, but the Madness is just beginning.

For starters, I am not referring to Clippers forward Steve Novak, who drilled 13 three-pointers in consecutive home games against New Jersey and Washington and told me he chose his alma mater of Marquette to make the Final Four in Detroit.

Nor am I referring L.A. Galaxy forward Landon Donovan single-handedly saving the Galaxy from a season-opening loss by scoring two goals within seven minutes to salvage a 2-2 tie against D.C. United. Though, one could argue 18,013 people actually showing up in Carson despite almost intolerable wind and the absence of David Beckham may qualify as madness.

He may be a bit loony for asking for a raise in this economy, but no one would truly say pitcher John Lackey is “mad” for saying the Los Angeles Angels of Anaheim were taking too long to extend his contract. Apparently, he thinks the Angels are no different than the Yankees, who just spent more money on C.C. Sabathia and Mark Teixeira than Iceland had to spend on its entire population this century.

Now, any other week, I’d be quick to use “madness” as an appropriate adjective to describe these events. But all this happened after my brief interview with former Trojan and current Wizards guard Nick Young shortly after his team lost to the Clippers last week. He told me USC would at least advance to the Sweet 16 – because he prayed to Allah for such success.

After that, there was an uneasy pause, and Young was no longer looking at me. Instead, he was looking over my head and directly at one of the Wizards’ team officials standing five feet behind me.

After an uneasy laugh, Young tried to retract his words and tell me he just hoped USC went deep into the tournament. I immediately wondered if those team officials were not too thrilled that Young said “Allah.”

Sensing discomfort and tension, I ended the interview. Almost immediately after I walked away, those same officials behind me approached Young as if to protest what he just said. Since I was the only reporter to speak with the former Trojan, I inferred Young was being admonished for his religious reference.

I could be jumping to conclusions, but Young’s face said it all to me. As he was cornered by the team officials, he looked like that lovable fifth-grade prankster who was suddenly pulled into the principal’s office to be lectured for calling someone a dufus. Of course, the team officials were acting as principal, the type that cares more about enforcing the minute nuances of the law within the classroom while ignoring blatant rule violations on the dodge ball court during recess.

Considering Young abruptly paused after he uttered “Allah,” his very uneasy laugh immediately thereafter, the sudden end to an otherwise cordial interview and the immediate pull-aside by team officials (and the look on Young’s face that said “I’m in trouble, and I have nothing to say to defend myself”), I could only infer someone was mildly upset because he said “Allah.”

If Young had instead said he prayed to God USC advanced to at least the Sweet 16, would anyone have noticed? Would he have been lectured? I’d like to say I’m the one going mad and I overanalyzed the whole situation.

But something tells me a couple people were not too happy with Young’s innocent reference to Islam. If that is indeed the case, then it is madness to think we no longer have work to do as a society.

Oh – neither Marquette nor USC made it out of the second round.