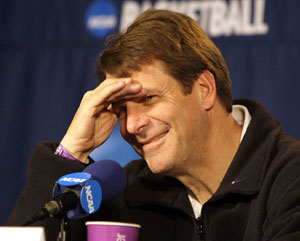 The Colorado Rapids took their nickname seriously on Saturday night when they faced the Galaxy at the Home Depot Center. Team forward Conor Casey scored 16 seconds into the game. As I researched whether it was the quickest goal in MLS history, I suddenly wondered which event took longer to occur – Casey’s goal or Tim Floyd’s decision to remain as men’s basketball head coach at USC.

The 55-year-old was reportedly offered the head coach position at Arizona. Given 24 hours to make up his mind, Floyd turned down the offer. Good move. Floyd is definitely onto something special at USC, leading the Trojans to three consecutive NCAA Tournament appearances, Pac-10 Tournament championship and a recent first-round upset over Boston College.

As much as Lute Olson did for Arizona’s basketball program, Floyd’s work in University Park has turned the Trojans into a competitive program. Had he left Los Angeles for Tucson, Floyd would basically be starting over – even though the Wildcats have the second-longest current streak of NCAA Tournament appearances (25). With no major recruits flocking to Tucson, Floyd’s decision to stay is magnified by the fact he is one of only three or four other coaches in the nation to coach a Top 5 recruit and a potential NBA top pick – Renardo Sidney.

Floyd is definitely in a better position than former Dallas police officer Robert Powell, who resigned last week after he was publicly scolded for confronting Houston Texans’ running back Ryan Moats at a Plano, Texas area hospital just moments before Moats’ mother-in-law passed away. In the fallout since, a Dallas Morning News editorial called for Powell’s dismissal.

What good is achieved by Powell’s resignation? Is it really a just punishment? Or does it merely make us “feel better” as a society?

Now, I am not condoning what Powell did that fateful night in the hospital parking lot. Some could argue Powell acted out of bigotry, prejudice, hate, ignorance, stupidity – or all of the above. Yet, did his action warrant a demand of dismissal or an expectation of resignation?

After all, do you know how you would act in the situation Powell was faced with? Honestly, I do not know what I would have done. I’d like to think I would have been compassionate and understanding. Then again, maybe I would have acted the same as Powell.

The now former-Dallas police officer exercised poor judgment, for which there should be consequences. Demote him, sure. Relegate Powell to desk duties, OK. Suspend the guy without pay, why not? These measures probably would have indicated to Powell that he screwed up without having to demand his dismissal or expect a resignation.

It is easy for us to sit on our white tower and tell other people how to act in situations we are unfamiliar with. Many of us would never admit this, but in the heat of the moment, anyone of us could have exercised poor judgment – just like Powell did. There are many who would also resign as a result, but is it really the best decision?

Yes, Powell should be punished for his actions. His treatment of Moats was deplorable. But how will Powell’s resignation bring Moats’ mother-in-law back to life?

Oh, the quickest goal in Major League Soccer history occurred after a mere 11 seconds, slightly longer than Floyd’s career at Arizona or Powell’s career with the Dallas Police Department.