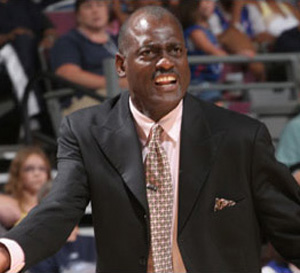 Michael Cooper gets fired up coaching the L.A. Sparks.

Michael Cooper must be the most overlooked athlete in L.A. sports history. He has won eight championships in professional basketball, including seven here in Los Angeles, yet no one will find his jersey hanging from the rafters of Staples Center or the Forum – or even Pasadena City College, for that matter.

Maybe USC will find some way to honor the man should he bring a national championship to Galen Center.

OK, I admit he is no Wayne Gretzky or Magic Johnson. Heck, Cooper is not even Gail Goodrich, who is perhaps one of the best basketball players to ever come out of Los Angeles (Goodrich was quite the star at Francis Poly High and UCLA before joining the Lakers.).

But the lanky basketball player who was fondly referred to as “Coooooop” during the Showtime days of the Lakers was significantly responsible for seven professional basketball championships in Los Angeles.

A winner on every level of professional basketball, Cooper is apparently setting his eyes on the college ranks after it was recently reported he is currently in talks with the University of Southern California to take over the reigns of the school’s women’s basketball team.

Perhaps on the verge of his eighth this season with the L.A. Sparks, Cooper has won a total of eight championships (five as a player, three as a coach) spread over NBA’s three functioning leagues – WNBA, NBA Developmental League and the NBA itself. Hailed by former Celtic great Larry Bird repeatedly as one of the “best defenders” he played against, the career Laker was among the club’s top 10 players in nine statistical categories. The league also recognized his defensive repertoire, awarding him the Defensive Player of the Year in 1987 and naming him five times to the NBA All-Defensive First Team and three times to the NBA All-Defensive Second Team.

Briefly joining the team’s front office as a special assistant to Jerry West, Cooper even served as Lakers coach for a game or two before assuming chief strategist duties down the Staples Center hallway with the Sparks (the Lakers’ WNBA counterpart) – where he won two championships and is a favorite to win a third this fall.

While his career numbers as a player are not at all astonishing (8.9 points, 4.2 assists, 3.2 rebounds, 1.2 steals and 0.6 blocks per game in games played between 1978 and 1990), the glossing over of Cooper’s legacy shows just how much we are spoiled here in Los Angeles. (By my count, at least 14 current or potential Hall of Famers have spent the peak of their careers playing, for a considerable amount of time, in Los Angeles.)

Yet his resume still remains impressive, winning with the Lakers, Sparks and Albuquerque Thunderbirds. Perhaps he will win a national title over at USC, should he join the women’s basketball program. But when he calls it quits for good, how will Cooper be remembered for his significant contributions to Los Angeles basketball?

I say it’s time to institute a Los Angeles Hall of Fame.

After all, many local high schools and colleges have such shrines dedicated to their successful athletes. Why not institute a regional shrine for every player who made a significant contribution to Southern California sports? Heck, it would even memorialize some of the greatest moments in Los Angeles.

If I had a vote, Cooper would be enshrined on my first ballot.