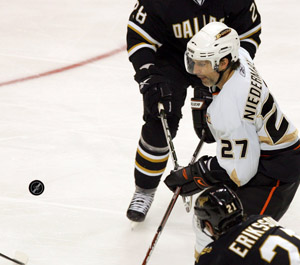 I wonder what marketers were thinking when they coined the phrase “It All Happens Here” for the NBA playoffs. While I am sure the association paid those marketers a hefty fee, I’d like to see the NHL challenge the NBA's catch-phrase or come up with a counter-jingle.

Anyone watching the Stanley Cup Playoffs knows full well all the action really happens on the ice.

Too bad more people stuck around to watch former Trojan Rey Maualuga’s stock drop down to No. 38 in the 2009 NFL Draft than the Stanley Cup race. I’m sure he wasn’t happy being a sitting duck. Then again, his now-former teammate Mark Sanchez is being thrown to the sharks of the New York media, so it all balances out in the end.

Usually at this time of year, the only places to find ice in California are an ice chest at a spring barbecue, inside the glass of a tall drink or in any well-working freezer. Sharks and ducks would usually be left on ice before preparing each respective being for a meal – unless of course you are talking about the Sharks and Ducks of NHL lore.

But, c’mon, ice hockey in California?! In April?! What’s next – Phoenix hosting the international curling championships in August?

Yet, even outside California, how many Americans follow the NHL? If two American sports franchises skate around an ice rink with sticks and chase around a black disc and no one is around to see it, did the purported sporting event really happen?

It is too bad there are fewer people watching professional ice hockey in the United States than those who watch paint dry for a living, but these Stanley Cup playoffs have consistently been entertaining. What is even cooler than the ice these players skate on is the very real possibility that any team has as real of a chance as any other team to win the most coveted trophy in North American sport. Only in March Madness can we find a more egalitarian playoff system.

Take, for example, these Sharks and Ducks. San Jose finished as the league’s top team with 117 points. Coincidentally, Anaheim entered as the team with the fewest points among playoff teams: 91. Hence, the first round Battle Royale of California pitted best versus worst. In most sports, such a playoff match-up would be written off as an automatic win for the top team.

Yet Anaheim forced San Jose to win three consecutive elimination games in order to advance to the second round. In the NHL, this is normal. Lower-seeded teams regularly sneak out of the first round.

In 2006, all four lower-seeded Western Conference teams advanced out of the first round, with the Edmonton Oilers (the west’s No. 8 team) coming within one game of winning the NHL title. Twice the Ducks have made it to at least the conference finals ranked as the west’s No. 7 seed.

Since 1998, 30 teams seeded fifth or lower in their respective conference – including five teams seeded No. 8 – advanced beyond the first round. The 2001 Stanley Cup Final was the only series in that time span to feature the top seeds from both conferences.

Those numbers alone tell me there is a lot more happening in the Stanley Cup Playoffs than the NBA Playoffs. I think Gary Bettman needs to hire the same marketers David Stern did.