Renardo Sidney: From Bruin to Trojan to Bulldog 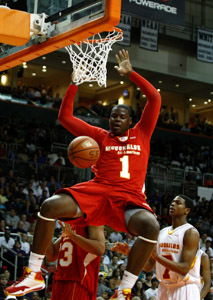 Looks like USC has become the University of Second Choice.

While Trojan-haters typically poke fun at the downtown L.A. university by labeling it with the aforementioned moniker, for once the joke is actually not on the University of Southern California.

Pity Sidney – the Mississippi native, who left the Southern state for Los Angeles to further his basketball career – has now come full circle and is going back where he came from, as he reportedly announced on April 30 his third choice will be the school he hopes to attend.

Just like that, a top five recruit and second-best high school power forward went from Pauley Pavilion to Galen Center to Starkville, Miss.. I am sure his parents are quite proud of how their six-foot-10 son furthered his basketball career.

Of course, all is not said and done. Sidney may still have quite the promising professional basketball career. Considering his size and basketball acumen, some lottery team will be more than happy to take a risk on him in the 2010 NBA Draft, allowing Sidney to cash in on a guaranteed four-year, multimillion dollar contract. Indeed, it is hard to argue the highly touted phenom is not progressing.

Yet, here is Sidney, suddenly taking backward steps from Bruin to Trojan to Bulldog. Naturally, this begs the question: Why?

The answer is quite simple, really: fear.

It is rare for two top-notch college basketball programs to pass on a top five recruit, so clearly, Sidney had red flags – and those red flags must have been waving ferociously these past three months. Neither school will go on record in providing a detailed explanation as to why they let such a phenomenal player walk off their respective campuses quicker than a student caught cheating on a chemistry exam while paying off the professor. Yet, do they really have to provide an explanation?

The easy answer, of course, is “CYA” – as in cover your, err, behind. Increasingly, more and more college athletic programs are recruiting with a weary eye in an attempt to avoid a crackdown by the NCAA.

Sure, a school may land a top-notch recruit who is good enough to make it an instant contender. But, in the end, the risk is just not worth the reward.

That risk often takes the form of the recruit’s family members or associated “friends.” Put in simpler terms, a school just does not want to deal with the questions that arise when the public inquires about the recruit’s sudden newfound wealth.

Sidney is a perfect case-in-point. A son of Renardo Sr. and Patricia, the high school senior does not exactly come from a well-to-do family.

According to reports, the Sidney family lives off quite a modest income, yet has managed to move several times throughout Los Angeles, living in some of the area’s most affluent areas. Further, Renardo Sr. directs a club basketball team with unknown financial backing, all while making no bones about the idea of profiting from his son’s success.

While no allegations have been made or direct links proven, the mere fact that there are already questions surrounding Sidney’s financial well-being is enough to make a nationally-recognized school think twice about having him play hoops there.

Too bad – while it is commendable to see schools being proactive in taking potential NCAA recruiting violations seriously, it is also quite sad to see parents be equally proactive in attempting to profit off their child’s athletic talents a bit too early.

Sure, it is the American way to try to make a quick buck. But there is also a heavy price to pay, and Sidney is paying that price right now.