Blame It on the Fans 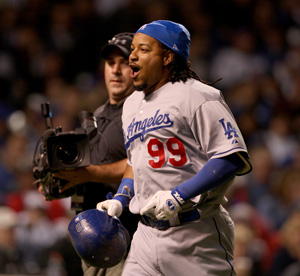 Hey, Jamie Foxx said it, not me.

If I had a choice, I would rather quote Jimmie Foxx. Instead, I say blame it on the sexual enhancements pills. Or, maybe we really can blame the alcohol – it is really just a matter of perspective.

What I should be saying is, point the finger at all those people spending their disposable income on beer and warming up those precious little seats at stadiums all across America.

In a matter of just a few days, two athletes – and that is if you count race car drivers and Manny Ramirez as actual “athletes” – are slapped quite hard in the face after each apparently threw down some enhancement pills.

For those sports fans who happen to mimic flamingos and stuff their collective heads in perfectly shaped holes in the ground just as everything in life – or, in this case, the sports world – goes wrong, Dodger slugger Ramirez earned a hefty 50-game suspension for taking estrogen pills. (Rumor had it he was vying for a spot on Oprah as the world’s first pregnant male baseball player.)

Oh, and race car driver Jeremy Mayfield was also tickled by NASCAR doping officials when he was suspended indefinitely from driving in circles for his chemistry experiment of mixing his own blood with a yet to be disclosed drug.

I cannot speak for NASCAR, but in baseball, a common school of thought has emerged these past few years in our attempt to warp our collective minds around doping and sport. It would be naïve to think the quirky marriage between drugs and athletes is a recent phenomenon, but that has not stopped most of us from claiming our favorite sports stars result to taking various forms of drugs for the sake of a few extra million dollars.

Oh, the agony. I wish I had the luxury of finding some tool to exploit my talents in order to have the difficult decision of buying one Lamborghini or five … or even 10!

I am sure money had something to do with the decision to poke holes in one’s skin. Yet, athletes are human, too. They probably love the roar of the crowd as much as they love deciding how many mansions to buy.

In sports, it is all about putting behinds (read: fans) into seats. Most behinds will not want a seat unless they are given something worth seeing (read: a ton of offense).

In baseball, that something worth seeing is the home run. Fans want to see the home run. Ramirez (and a few of his slugging friends) merely gave us what we wanted – a lot of home runs.

Basically, fans showed team owners the money. In turn, those owners told sluggers to hit plenty of home runs if they want a fair share of that money. The sluggers responded. The fans continued to show up. The owners continued to pay.

So why are we complaining? Isn’t Ramirez just giving us fans what we want?

I think I should re-write Foxx’s song: