Other California Schools Count, Too 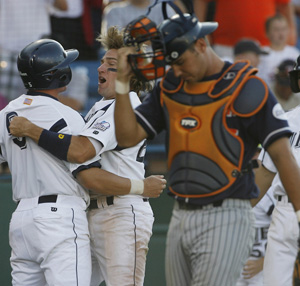 It may have been a weekend of remembrance, but this past Memorial Day Weekend seemed to be all about the forgotten – neigh, overlooked – college athletic teams in Southern California.

OK, so we have a college football team in USC doubling as the 33rd NFL franchise and a college basketball team in UCLA serving as the gold standard of hardwood success. In remembering the honor and traditions of two powerhouse schools in the heart of the city, the Bruins and Trojans make us forget we have several other quality schools throughout Southern California.

Just ask the University of California-Irvine whether there is life outside of Westwood or University Park. After all, the school just nabbed the 2009 NCAA Men’s Volleyball Championship at the expense of USC. Oh, and the school’s baseball team will headline the College World Series, where the Anteaters were designated as regional host.

Joining UCI as regional host are the Titans of Cal State Fullerton, who have quite the baseball program down in Northern Orange County. So, while the Trojans and Bruins battle it out for bragging rights up in the heart of Los Angeles, it is the Anteaters and Titans rumbling for suburban college sports supremacy.

Oddly enough, neither UCLA nor USC will field their respective baseball teams in the upcoming College World Series tournament, while UCI and Fullerton will. Of course, both schools are no strangers to the College World Series, with both sides facing each other in Omaha in 2007.

UCI will definitely have their work cut out for them, opening against defending national champion Fresno State June 5. Yet, perhaps the Anteaters could borrow some good vibes from the school’s volleyball team who claimed the 2009 NCAA Men’s Volleyball Championship this past weekend.

Should the Anteaters defeat the Bulldogs, UCI would potentially face opponents such as Virginia (the Atlantic Coast Conference tournament winner) or San Diego State (led by pitcher Stephen Strasburg, projected to be the top selection in the MLB Draft).

A few miles north, Fullerton hosts a regional that includes Utah (first tournament bid since 1960), Georgia Southern and Gonzaga (West Coast Conference champion). While the Titans may have a slightly easier path to Omaha than the Anteaters, both teams appear to be talented enough to handle the competition. After all, UCI finished with a record of 42-14, while Fullerton settled for a 43-13 mark – neither finish was accidental.

While Orange County is trying to make its mark in the Southern California college athletics scene, there are a few other schools closer to UCLA or USC who are also quite competitive. Earlier this year, the Matadors of Cal State Northridge earned a spot in the men’s basketball tournament, while the Cal State Long Beach 49ers did the same in 2008.

Every so often, we will hear a peep or two from Los Angeles’ two major religious institutions, Loyola Marymount and Pepperdine, with both programs generally performing well in baseball. Too bad we cannot include San Diego’s collegiate sports programs in this discussion, even though the Aztecs of San Diego State do have a legitimate opportunity to derail UCI’s national title hopes.

Ultimately, it is nice to see college programs other than UCLA and USC doing well in Southern California. Sure, the Trojans and the Bruins hog most of the media space between Santa Barbara and the Mexican border, but that does not mean they are the only two quality college athletic programs in Los Angeles – even though there are a few people on each respective campus who may say otherwise.

Following a long holiday weekend designated for remembrance, let us not forget about the great happenings taking place at every gymnasium, park or stadium not home to UCLA or USC.

The Sports Wanderer
Welcome to the Pacific-12
44,476 views

The Sports Wanderer
Gagne With the Wind
1,996 views

The Sports Wanderer
Godzilla Dons Halo in The Bronx
2,106 views

The Sports Wanderer
Jerry Busses to the Famed Hall
1,942 views

The Sports Wanderer
Get Rid of the Clippers
2,412 views

The Sports Wanderer
A Bleeding Heart for Vinny
2,802 views

The Sports Wanderer
No Angels In This Bracket: 2010 March Madness
1,951 views

The Sports Wanderer
Kobe Opting Out of Los Angeles
1,953 views