The Return of David Beckham 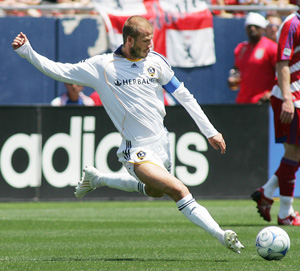 Call it the summer of returns and redemption for the Los Angeles megastar.

This week, Kobe Bryant returns to the NBA Finals, hoping to redeem himself by leading the Lakers to a championship after last year’s miserable performance against Boston.

Oh, and then there is Los Angeles’ other megastar – David Beckham. No, we have yet to rid ourselves of the one-time British great. Sure, he has been playing in Italy these past few months, but he is on his way back to Los Angeles.

On Sunday, Beckham’s loan to AC Milan expired – a few hours after the Galaxy settled for their fifth consecutive tie and tenth draw in 11 matches (including one U.S. Open contest). Now, he appears to be all set to return to the Galaxy. The question is, does anyone care?

Right now, his expected return to the Galaxy is July 11, with his first MLS match coming five days later on a roadie against New York. Coincidentally, the Galaxy and AC Milan participate in an international friendly the following day at Home Depot Center.

Questions will surely abound about whether Beckham should even continue to be a member of the Galaxy, after he apparently made every effort to leave the team for AC Milan during the MLS off season – with three years left on his American soccer contract.

There will probably be a contingent of Galaxy fans who will not welcome the popular fútbol player back to the center of Southern California’s soccer universe. A contingent of “groupies” and casual fans aside, Beckham ultimately has to answer a few questions if he wants any shot of redemption from Los Angeles’ loyal soccer fans.

The most obvious question is why he is returning to Los Angeles in the first place. Beckham made no bones about his desire to play for England in the 2010 World Cup. Surely, no one can rightfully hold it against him to want to represent his country while he is still capable of doing so.

Yet, his belief that playing for AC Milan bolstered his chances to perform well during this month’s World Cup qualifiers was a slap in the face to Major League Soccer, implying it is an inferior product.

To be sure, the MLS does have a lot of work to do to become an “equal” to professional leagues in Europe and South America. Yet, it appears as if Beckham places little value on American soccer. So why even play here to begin with? Worst yet, why return after already implying his international career is stunted by the MLS? Even if he came here initially for the money, he clearly had second thoughts about playing here.

Surely, Galaxy management factors into the equation, as the team’s asking price to let Beckham out of his contract was too high for AC Milan, or anyone else for that matter.

Yet, the fans are not going to care about that. What they do care about is what Beckham does when he finally dons the blue, gold and white. There will probably be quite a few fans who loudly voice their opinion about the Brit, and rest assured, some of those fans’ opinions will not be too favorable.

Ultimately, Beckham has only one way to shut them up – serve as the missing link on a team who is so close to winning and, ultimately, secure a playoff berth.

Of course, just like Bryant with the Lakers and Manny with the Dodgers, all is forgiven if Beckham can bring a league championship to Los Angeles.