Kris Allen Gets Booed at Staples 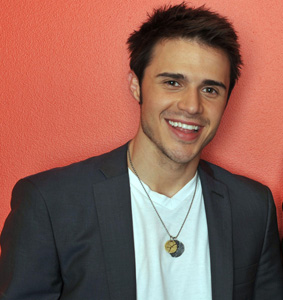 He might be America’s “Idol,” yet a few basketball fans in the country’s second largest city apparently did not get the memo on Sunday about Kris Allen’s singing talents. Those boos you heard at Staples Center just before tipoff of game two of the NBA Finals between the Lakers and Orlando Magic were not because fans were upset at taking out a fifth mortgage only to have enough money to afford a seat some 200 feet above the hardwood in the stadium rafters. No, those boos were apparently for Allen’s rendition of the national anthem.

And what exactly was wrong with Allen’s singing on Sunday? I mean, this was not exactly Roseanne Barr’s glass-breaking, ear-covering performance before a San Diego Padres game in 1990. Nor was it Whitney Houston’s rendition of the patriotic tune just before Super Bowl XXV in 1991, in which the famed singer turned the “Star Spangled Banner” into a Billboard Top 100 hit.

This was not even Tyrese Gibson’s version of the national anthem. For those who do not know, Gibson performed the national anthem at Staples Center during last month’s Western Conference Finals and opted to add some personal touches to the song – specifically, instead of singing “our flag was still there,” Gibson uttered “our Lakers were still there.”

Allen’s performance was what you would expect from an aspiring pop singer given the large stage that is the NBA Finals in, of all places, Los Angeles. Fresh off “American Idol” and popularity rising faster than the unemployment rate in Kalamazoo, Mich., Allen probably figured he would use the opportunity so graciously handed over to him to highlight his range and singing ability – you know, that same range and ability that earned him first place honors on “American Idol.” I doubt Allen expected a few Simon Cowell wannabes sitting in the audience.

In the end, Allen was just a little nervous delivering what is considered by many to be one of the hardest songs to sing – especially in public. Allen admitted on his Twitter page this would be his first-ever performance of the patriotic song in public. He even told the Los Angeles Times, “I just want to get through it and not make any mistakes.”

Ultimately, fans should have cut Allen some slack. I say, if a singer can somehow manage to take advantage of his or her God-given talents to sing what they believe to be an amazing national anthem, so be it.

Then again, I wonder if those boos came from fans of “Idol” runner-up Adam Lambert. While Lambert was not spotted at the game, he surely had a few supporters who turned out at Staples Center Sunday.