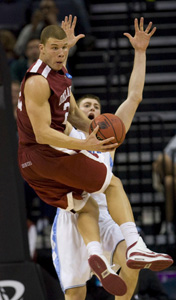 Memo to Donald Sterling – the Lakers are not the only winners in this town. Indeed, you, too, can claim a championship of sorts. On Thursday, you will be honored for your accomplishments of this past season. But, you see, your impending honor does not include the Larry O’Brien Trophy.

Instead, your prize is in the form of a human being. The question you have to answer is this: Which human being will you make your top prize on Thursday? If I can have your ear for just one quick second, may I suggest Oklahoma’s Blake Griffin?

Oddly enough, your team has a history of throwing conventional wisdom out the door. On occasion, your former general manager, Elgin Baylor, has made the right selection on your behalf. But do you trust your current man, Mike Dunleavy, to do the right thing? After all, he has confusing precedent for making the right selection. It was your old pal Baylor who set the standard on how to totally botch the greatest gift the association gives its poorly performing franchises.

So which precedent will you rely upon this week? The one set in 1988, when Baylor selected Danny Manning from Kansas? Or the one established in 1998, when Baylor laughed in the face of conventional wisdom and selected a project in Michael Olowokandi over the sure thing in Mike Bibby?

Well, I certainly hope Dunleavy chooses the precedent of 1988. After all, that was the last time you had the top draft pick in the same summer as a Lakers championship – and we all know what a bust Olowokandi became.

Just in case my point did not come across, here is a little cheat sheet for you. Oh, Mitch Kupchak, if you have to be reading this memo, too, I scribbled some notes for the three picks you have in this week’s draft. Have fun, guys!

This is the only pick the Clippers have in the entire draft. Griffin is the most skilled athlete available. He can rebound, score, pass the ball and play defense. Further, he is a class act who can serve as the face of the franchise. Think of him as the latest version of Shane Battier or Emeka Okafor – a solid, all-around player who will do everything asked of him.

The Lakers have size, but no one to back up Lamar Odom, Pau Gasol or Andrew Bynum. Selecting Taj Gibson will allow the Lakers to use Bynum, Odom and Gasol as starters. Further, he will give the Lakers depth off the bench with his rebounding and shot-blocking skills. He also perfectly complements a second unit of Jordan Farmar, Trevor Ariza and Shannon Brown (especially if the latter two re-sign with the team this summer).

Obtained in the mid-season trade with Charlotte, the Lakers may use this pick for size, as well. Jerebko has the size of a solid big man but is also athletic and is developing a solid mid- and long-range shot. While he’s weak off the dribble and struggles against players his size, Jerebko would make a great situational player for the Lakers.

Phil Jackson likes big point guards, and Tepic fits that description well. He is neither quick nor explosive and not a true point guard, but he definitely has NBA size. To his credit, he never forces the issue and sees the floor quite well. Regardless, Tepic is a long shot to actually make the team.