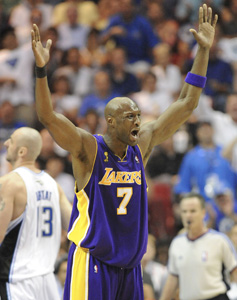 Will the 2009 Finals be the last time we see Lamar Odom in purple and gold?
(Credit: Paul Rodriguez/Orange County Register/MCT)

Win a championship. Collect some cash.

Certainly, that is what is on the mind of at least four men in Los Angeles. One of those men – Trevor Ariza – made a brief appearance at Dodger Stadium on Sunday to throw out the ceremonial first pitch. The next pitch involving Ariza will not be so ceremonial.

Unlike his appointment on the mound in Elysian Park, Ariza, along with three of his cronies, will be catching the next fastball thrown their collective way. Except, instead of a ball, the quartet of men (which include Lamar Odom, Kobe Bryant and Shannon Brown) hope to be catching some extra dollar bills this month.

This week, the free agent courting process begins in the NBA. Ariza, Odom and Brown are unrestricted free agents, meaning they can play with whatever team they want to next year, so long as the other team wants them and has the cash to pay their bills.

Not quite a free agent just yet, Bryant may opt out of his current contract if he so chooses and join his three Lakers teammates and seek riches from another team. It is expected the man known as the Black Mamba will indeed opt out of his contract this summer, seeking a longer, richer contract.

No one is really worried about Bryant, or even Brown for that matter. After all, Bryant is expected to re-sign with the Lakers. Further, while Brown was a bit of a fan favorite, he really was not around long enough to be missed should he leave.

The big question marks, of course, are Odom and Ariza. If the Lakers do absolutely nothing this summer, they are already committed to more than $74 million in salary. Perhaps their cost-cutting moves at last week’s draft, where the team saved about $6.2 million by trading away two of its three draft picks, will help somewhat.

Yet, both Odom and Ariza clogged up about $14 million last season, and both expect at least the same amount of cash this year, if not more. Just maintaining the 2008 levels, the contracts of Odom and Ariza will commit the Lakers at about $88 million – assuming, of course, Bryant does not opt out of his contract for more money himself.

That figure is dangerously flirting with the $90 million luxury tax cap. Once that figure is hit, Dr. Jerry Buss is dinged with a dollar-for-dollar tax for each penny spent over $70 million, the salary cap limit of last season.

Some team out there, say Detroit or Charlotte, has enough cap space to offer Ariza much more than the $2.9 million he earned last season. Either team can also afford Odom’s $12 million price tag.

If, say, the Pistons offer $5 million, a matching offer by the Lakers combined with Buss’ decision to retain Odom at the same $12 million he made in 2008 means Los Angeles will hit that luxury cap threshold. Just like that, Buss is doling out an additional $20 million. Put in other words, he is paying about $37 million for players that are only worth $17 million on the free market.

That begs the question – is it good business to re-sign both Odom and Ariza? Good business says you target just one player. That player will likely be Odom.

Odds are Lakers will definitely let Brown seek his riches elsewhere. If Buss can convince both Odom and Ariza to accept less money than last season, only then do both players have a chance to remain in Los Angeles – especially if Bryant does not take a pay cut.

Otherwise, the last time we may have seen Odom in a Lakers uniform was when he was bombarded by his teammates a couple weeks ago in Orlando. Worst yet, we may have seen Ariza in his last Los Angeles uniform when he donned that Dodgers jersey on Sunday afternoon.

The Sports Wanderer
Welcome to the Pacific-12
44,349 views

The Sports Wanderer
Gagne With the Wind
1,900 views

The Sports Wanderer
Godzilla Dons Halo in The Bronx
2,028 views

The Sports Wanderer
Jerry Busses to the Famed Hall
1,847 views

The Sports Wanderer
Get Rid of the Clippers
2,322 views

The Sports Wanderer
A Bleeding Heart for Vinny
2,717 views

The Sports Wanderer
No Angels In This Bracket: 2010 March Madness
1,861 views

The Sports Wanderer
Kobe Opting Out of Los Angeles
1,876 views

The Sports Wanderer
The Golden OC and the Silver L.A.
2,678 views