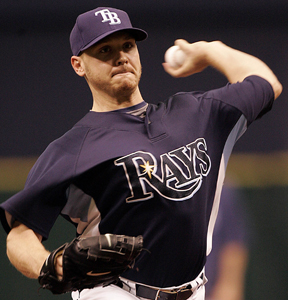 Scott Kazmir lands with the Angels.
(Credit: Michael Perez/Philadelphia Inquirer/MCT)
Perhaps “Rico Suave” may no longer be an ideal name for Scott Kazmir. That nickname is so Miami; it is not “Hollywood” enough.

OK, Kazmir actually played on the opposite end of the Florida peninsula and his new home stadium is as far from San Diego County as it is from Hollywood, but the former Rays pitcher needs to Californify his name. That’s right, I said it – “Californify.”

I am also saying this: Kazmir’s new name is Angelic Savior.

Such a name seemed fitting for Manny Ramirez when he arrived in Los Angeles in July 2008, but seeing as how he is struggling mightily with his bat, perhaps No. 99 is happier to just be getting a paycheck than being labeled anyone’s “Savior.”

As Manny dodges trolleys of questions about his faltering Sultan of Swat status, Kazmir is upgrading to a Halo after swapping a Demon for an Angel. Yeah, sure, Tampa Bay dropped the “Devil” from their official nickname, but the Little Team that Could on Florida’s Gulf Coast seems intent on exorcising all of its evil spirits in asking Kazmir to also drop the “Rays” from his jersey as well, replacing it with “Angels.”

Woe is Kazmir. The pitcher with the lowest earned-run-average for any starter who played more than one season in Tampa Bay finds himself with a very realistic chance to represent the American League in the World Series for the second consecutive season – and this time, his chances of actually coming out on top have dramatically increased as he crosses over four time zones to the left coast.

In pulling off quite the late-season trade that may very well delay that off-season vacation in Bora Bora by a few weeks, the Angels have quickly become the class of Southern California baseball, blatantly taking that title away from the Blue Crew of Chavez Ravine.

Playing into all the stereotypes of a small-market franchise, the team formerly known as the Tampa Bay Devil Rays started its one-season-after-World-Series-appearance fire sale in trading Kazmir to the team known at one time as either the Los Angeles, California or Anaheim Angels for three prospects.

Woe is the Rays. Excited are the Angels.

It does not take a genius to understand Los Angeles Angels of Anaheim are the clear winners in this trade – the Angels can now boast a playoff starting rotation of Kazmir, Jered Weaver and John Lackey. With an offensive lineup that at one point this season featured all nine batters hitting .300 or better at the same time, the Angels suddenly like their chances of postseason success.

With that, what makes this trade so, well, crazy, is not that it was made by a Southern California team, instead, it was the team that pulled the trigger that causes more than a few people to scratch their heads. There was a time when the Dodgers were the team who made all the right moves to build a World Series contender, while the Angels were cursed losers who would never win a championship.

Yet, here we are, heading into the season’s final 30 games, with both Dodgers and Angels leading their respective divisions at the same time for the first time in, oh, I don’t know, forever – and the Angels are the only team who grabbed the bull by the horns.

Both teams entered 2009 as contenders, with strong bats but some glaring weaknesses on the mound. However, only the Halos found a way to infuse a Savior into their starting rotation, while the Blue Crew apparently kept their trolley on cruise control.

With Kazmir coming to Southern California, he may be bringing a World Series trophy with him. Too bad for Frank McCourt that it will be Arte Moreno holding up the hardware at the Series’ end, and that would be quite the horrific nightmare for anyone that’s not an Angel.
Article posted on 8/31/2009
This article has been viewed 1782 times.