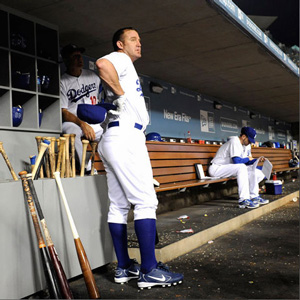 He is a future Hall-of-Famer and the latest big-time sports personality to join the L.A. sports scene. But Jim Thome is such a nice guy that he may actually miss out on joining the elite 600 Home Run Club.

Just how nice is Thome? Well, there are 10 students attending college right now, none of whom have to worry about paying their tuition, all because he is taking care of them. OK, they are all his nieces and nephews, making him the proverbial rich uncle. Makes you wonder if they call him “Uncle Jimmy” or “Godfather Corleone.”

Actually, after chatting with Thome recently, “Godfather Corleone” just does not seem right. He is such a nice guy, how can anyone not call him “Uncle Jimmy.” In fact, for the rest of this column, that is exactly how I am going to refer to him.

For Uncle Jimmy, paying the college tuition for his 10 nieces and nephews alone should qualify him as a nice guy; but why stop there? Uncle Jimmy once told an ESPN reporter that he hit two home runs for one of his nephews who was paralyzed in an accident, because that nephew asked Uncle Jimmy to hit a home run for him.

If that is not enough, he was one of about 50 players who sported a pink bat in a 2006 game to support the Breast Cancer Foundation. Finally, a recent Major League poll of 464 players said Uncle Jimmy was tied with Mike Sweeney as the second friendliest player in baseball.

Tales of nice guys are always abounding, but is Uncle Jimmy the real deal? Well, since he was just traded over to the Dodgers last week, I decided to find out for myself by paying him a visit in the team clubhouse, moments after he had his first at-bat as a Dodger Sept. 4.

Waiting 30 minutes in the clubhouse after a 2-0 loss to the San Diego Padres last Friday, Uncle Jimmy appeared at his locker and had a little chat with me. He started by sharing a few thoughts on the ovation he received as he approached the batter’s box as a pinch hitter in the bottom of the eighth inning.

Nice! He recognizes his new fan base, and is appreciative of their warm welcome to Chavez Ravine.

Yet what makes this whole thing about Uncle Jimmy’s niceness is not that he appreciates the crowd, but instead the sacrifices he made just to be here. See, Uncle Jimmy is a career .278 hitter with 564 home runs, 1,562 runs batted in and 2,135 hits in a career that started in Cleveland back in 1991. He had a steady gig as a pinch hitter these last few seasons with the Chicago White Sox – a regular starter.

And here he is, accepting a lesser role as a pinch hitter on a team already stacked with offense. All that is expected of him is for him to be ready on moment’s notice and successfully swing his bat in the clutch.?At age 39, taking this new role as part-time hitter may mean he loses out on joining that exclusive 600 Home Run Club, which includes names like Hank Aaron and Babe Ruth. It almost seems as if Uncle Jimmy is being too nice for his own good.

But is he really? Well, perhaps Uncle Jimmy is really trading up, exchanging exclusive membership to one club with another – the World Series Winners’ Club.

In his 18 year career, that is all he is missing – a championship ring.

“The ultimate is to win the game,” Uncle Jimmy told me. “You’re getting loose; you come off the bench like that, you know, it’s nice to get in there. It was a couple days and now, today, I was hoping to get a chance.”

Well, Uncle Jimmy, I certainly hope you get your chance to win a World Series ring with the Dodgers. After all, it might be the last realistic chance for us nice guys to show the world that we do not always finish last.